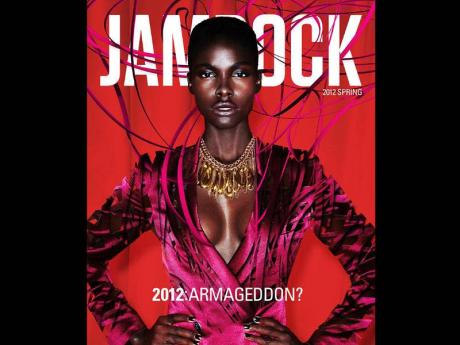 Magazine covers are becoming a staple in Jeneil Williams' arsenal of major bookings. Having appeared on the cover of LOVE, SHE, French, i-D, and The Wallstreet Journal, the Pulse high fashion beauty has now added JAMROCK magazine to her slate.

Of the line-up of supermodels who have come from Pulse, Jeneil takes top honours for gracing the most diverse covers which have spanned the four major markets of fashion. Forerunner Kimberley Mais is the only other Pulse model to have appeared on more covers than Williams. However, these appeared in Mais' primary market of Japan.

In its premier global issue, the girl with the enviable dark chocolate tone makes a commanding statement in a fuschia jacket that contrasts perfectly with her complexion on what is arguably the magazine's best cover to date. The image is quite fitting for Williams, who has scored significant distinctions across the spectrum of global fashion.

Williams continues to work with luminaries in the trade, producing fashion images at the highest levels in the industry. She was the perfect fit for last year's instalment of the Pirelli calendar shot by the extraordinary fashion maverick, Karl Lagerfeld. In another collaboration with the Chanel boss, Williams shot the Diet Coke campaign which appears in the world key fashion magazines and on billboards all over Europe.

Williams has enjoyed an exceptional run of form in the past two years. She has appeared twice in both the Italian and Russian editions of Vogue, American Vogue, British Vogue, Teen Vogue, Bennetton, Lanvin, Aldo, Gratzia, L'Oréal, Victoria Secret, Nordstrom, Cosmopolitan, Quarters, Paul Smith, Gant, Loewe, Lilly Pulitzer, Rodeo, Richard Chai, Fly, Vena Cava and Diesel are just a few of the myriad of magazines she has graced.

As her client list expands with on camera gigs growing in importance and depth, so too are the social requests for Williams to attend major events in fashion and entertainment. Williams has been among the guests of galas in Paris and New York with A-list actors, top fashion editors, recording stars and entertainment moguls including Janet Jackson, Usher, Anna Wintour and Oprah Winfrey.

Celebrity associations aside, these events are often to celebrate Williams' work - as was the case with the LOVE gala in - as well as to support charity (the Met Ball in New York) and represents her growing stature as a significant personality in the industry.