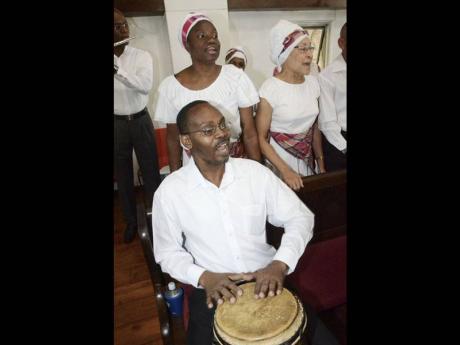 A member of The Jamaican Folk Singers plays the Congo drum during the anniversary church service. 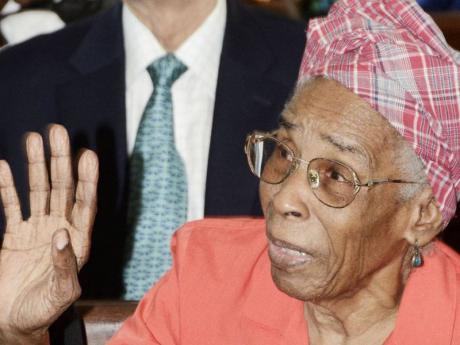 Dr Olive Lewin, founder of the The Jamaican Folk Singers, waves to the members of the group as they perform during its 45th anniversary church service. 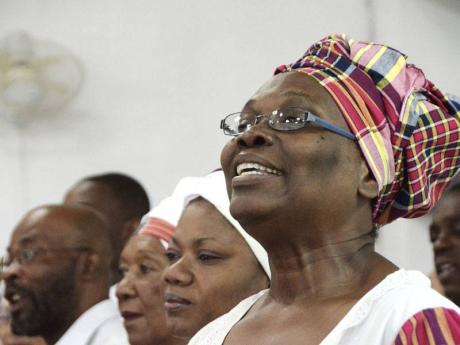 On Sunday, the Jamaican Folk Singers treated members of the Providence Methodist Church in the Caribbean and the Americas to spiritual entertainment and an insight into Jamaica's musical history.

The church was hosting the iconic singers' 45th anniversary service, where the presentation of a cheque, an address from the Folk Singers, as well as uplifting renditions of familiar gospel choruses and songs were done.

Immersed in the regular order of service there was no denying that the guests were expected. The first evidence was presented in the group being asked to prepare the congregation for worship through song.

They began their musical ministry with It's A Hard Road to Travel, which was in line with their anniversary theme. Next, the group, Olive Lewin's brainchild, followed with a stirring rendition of Something In My Heart. The reflective Wounded Hands, which followed, was just as stirring. The music got richer with On Wings of A Dove, when a flute was added to the piano and Congo drum. Finally, the bandana-wearing group closed the segment with the chorus Oil in My Lamp.

She spoke of the journey of the group. It began in 1966 when Olive Lewin, as part of her job portfolio, was asked to research Jamaica's folk music. A year later, March 15, 1967, the research culminated in the formation of the Jamaican Folk Singers. It comprised of eight friends. Today, the group boasts a membership of 28.

McDonald-Nevers told the congregation that "Dr Olive Lewin has dedicated her life and talents to the preservation of Jamaica's music ... .

"Through the Jamaican Folk Singers, the songs are brought to life and, in so doing, create a bond of communication between the past and present."

McDonald-Nevers continued: "The Jamaican Folk Singers believes that music greatly helped our forefathers deal with the realities of their very harsh living without becoming excessively bitter and hate-filled. And today, music can also bring and hold people together."

Additionally, the Jamaican ambassadors of folk music have travelled extensively, but no tour has been more rewarding "as being cheered and welcomed by Jamaicans in the parishes visited on the Berger Paint-sponsored tours in the 1980s and the Mother's-sponsored island tour in 2009-2010".

In such cases, the performances took place in markets, churches, on street corners, enjoyed by "the young, old and everyone in between".

The Culture, Health, Arts, Sports and Education Fund was also thanked for its support; and the newest member of the extended family, Sagicor, was also acknowledged.

In spite of the many successes, like all groups of this ilk, there are challenges, but according to McDonald-Nevers, "The joy still outweighs the challenges: the joy of fellowship, of working together, the joys of bringing people of widely different values together, and the joy of discovering the beauty of that which is within and around us."

Before rejoining her colleagues seated to the right of the audience, the musical director invited the Reverend Everald Galbraith to accept a donation from the group.

The final act from the Jamaican Folk Singers' 45th anniversary service was the singing of The Lord's Prayer. And like the previous selections performed by the group, it was another Lewin arrangement.

The very slow and delicate interpretation of the song was well received by the congregation.