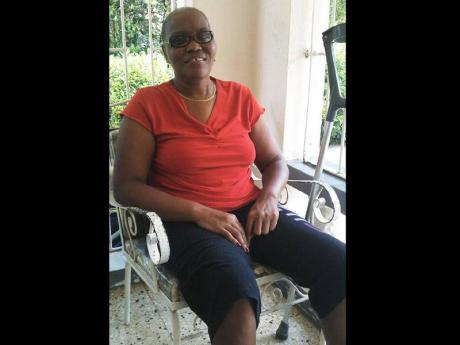 Campbell: I'm only human, but I just try to focus my mind.

Angella Campbell is enduring her third year of a war waged by a cancer that has slowly taken grip of her body.

Since she was first diagnosed with breast cancer in 2009, doctors have prescribed her with a cocktail of medications - some ease the pain and others reduce the nausea associated with chemotherapy, but the most important medicine of all, the one that actively targets cancerous cells, is simply too expensive for her to buy.

Approximately $207,000 will buy one dose of the life saving immuno-therapy drug Herceptin, but Angella needs one dose of Herceptin every three weeks. Without this, her ability to fight the cancer is significantly diminished; she is fighting her war with no armour, no sword.

And it is a cane that has become the symbol of Angella's battle to beat the cancer that has journeyed from her breast, to her brain and even further, to the core of her bones.

As she sits down with The Gleaner at her home in Eltham, St Ann, to explain her plight, it is clear that the cane is also a pillar of strength - always within reaching distance, it's an indication that her body is weak, but that her mind is strong. Her psychological crutch, the cane, keeps her physically independent at a time when she is depending on others for financial assistance.

"Yes, I'm worried," she said, speaking from her veranda on a warm March afternoon.

"I'm only human, but I just try to focus my mind because I say people are living. I try to think of persons that are living for 20 years with cancer and they are still living and looking good and all of that, so I try to focus on persons who are alive, out there enjoying their lives."

A radio plays softly in the background which periodically draws Angella's attention away from the sobering topic of cancer.

"I try to focus my mind that way and I say to myself I have things to live for, I haven't accomplished anything really, you know, all that God wants me to accomplish so I just try to focus my mind away from it. Sometimes the feelings come over me, I feel like, wow, wonder if, you know, if I'm going to see my next birthday or something like that. Then I think back again and I say 'Yes, I'm gonna be here'."

According to Dr Jean Walters, a Kingston-based oncologist: "The mind is a very powerful component of treatment."

Speaking generally about cancer that has spread to other parts of the body, Walters said this was usually incurable but that, with a positive mental attitude, some patients can live for several years if they respond to treatment.

Angella told The Gleaner that on September 17 she will celebrate her 50th birthday.

"I want to get dressed up and go for dinner with my family for my birthday. I want to say that I did that at least once," she said, with the same positive attitude Walters explained cancer patients needed.