A religious experience in Mavis Bank 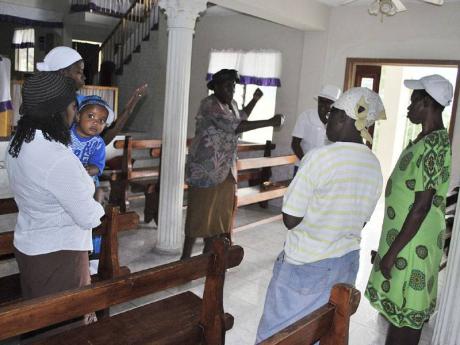 Worshippers singing inside the church. Photos by Robert Lalah 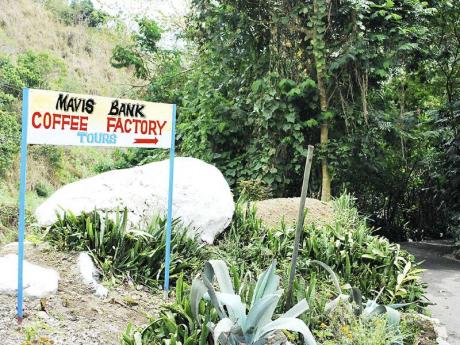 One of many signs pointing to places relating to coffee. 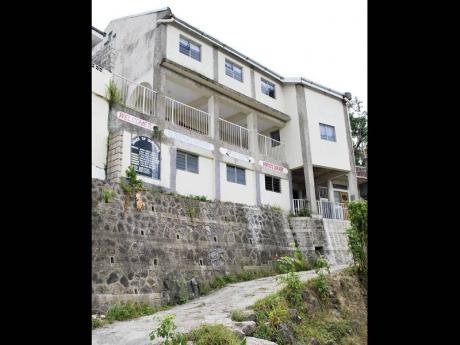 I could smell the coffee beans - I think. Maybe it was just the power of suggestion. All over Mavis Bank in rural St Andrew, there were signs pointing to coffee tours, coffee farms and coffee drop-off and pick-up points. I didn't see any actual coffee, though. In any event, after just a few minutes in the community, I was intoxicated by the unmistakable aroma.

Now as I walked along a narrow, winding roadway in Mavis Bank on an overcast weekday morning, I met quite a few people who were eager to stop and have a chat. I met Roy, the community pan-chicken man, hard at work, poking and prodding cuts of meat with a pointy fork. Scented smoke escaped from his oil drum-turned-chicken grill.

Roy's drum was set up at the side of the road, too close, in my estimation, to a precipice. I asked him if there was no better spot available.

I changed the subject by asking Roy how business was going.

A large truck was struggling up the hill, heading in our direction. It was nearly covered in thick, black smoke coming from its muffler.

Honk! Honk! The driver stuck his hand out the window. Roy waved back. There was a moment there that I was certain the truck wasn't going to make it, that it was surely going to roll back from whence it came. Surprisingly though, it withstood the challenge and vehicle and driver passed by without incident.

The smoke coming from the truck, coupled with that coming from the chicken drum, was a bit much to handle at once. I couldn't help but cough and try desperately to fan away the smoke.

"Hay, man!" Roy exclaimed, quickly closing the lid of the drum. "Is cook we cooking! Yuh can't cough so close to di food."

Now while I accept the premise of the statement, I couldn't help but consider why there was no such alarm raised over the smoke coming from the truck. I said nothing, but after a few minutes more of chatting with Roy and watching him sell sizeable helpings of chicken to a few customers, I said goodbye and walked away.

Fortunately, the smoke that had moments earlier infiltrated my lungs had by now mostly disappeared. I could smell coffee once more. I was enjoying the walk. There was a great view of the mountains and almost everyone I passed offered a smile and a wave.

"Woi!" I heard a scream and stopped cold in my tracks. I looked around but nobody else seemed surprised. "Woi, yah bah!"

There it was again. I walked up to a middle-aged man sitting half-asleep outside a small shop. I asked him where the screaming was coming from. He pointed lazily behind me. I turned and for the first time noticed a huge building on which the words 'The Pilgrim's Church of God' were painted. The screaming and hollering resumed with renewed fervour.

"Ay calamazoo! Shanga shanga!" It was rather loud and I again wondered how come nobody else appeared bothered in any way. I asked the lazy-looking man if this kind of crescendo was often reached by the worshippers gathered inside. He, however, was by now fast asleep, his eyes closed and mouth open.

I decided to go take a closer look. I climbed more steps than I anticipated to get to the front door of the church. I found six women standing inside, one clutching a bewildered-looking child. Another woman was praying out loud and the rest had their heads bowed. When the prayer was over, the woman with the child ushered me inside. Not wanting to seem rude, I stepped in and sat down. She walked over to me while yet another woman, a strapping middle-ager wearing a hat, started singing. The rest joined in. The woman with the child asked me if I was visiting for the first time. I introduced myself and told her that I happened to be passing by and was just having a look.

"Oh. You are welcome, man," she said and returned to her previous spot among the worshippers. The singing got louder.

The singing was sporadically injected with shouts of "amen!" and "oh yes!"

When the singing subsided, the woman in the hat started talking.

"And we welcome here now our young friend," she said, pointing to me. I felt hot under the spotlight.

"He is here to see what is happening, and we welcome him," she said.

Not knowing what else to do and without thinking, I stood up and took a quick bow. As I sat back down, I immediately wondered what kind of thing that was to do. The women, though, politely smiled, except the child, who appeared to notice that that was an odd move.

The woman in the hat spent the next several minutes bemoaning the ills of society, intermittently using words I did not understand. Now as time went by, I realised that the service was not going to end anytime soon. I didn't want to interrupt the service, but I did have to leave. I crept over to the woman with the child and whispered to her my thanks for the hospitality. I tip-toed closer to the door as the woman in the hat continued to preach. As I put my first foot outside, I heard the booming voice of the woman in the hat behind me: "And make sure that you make use of the Word of God! Make sure you don't forget what you hear!"