Morton laid to rest in homeland 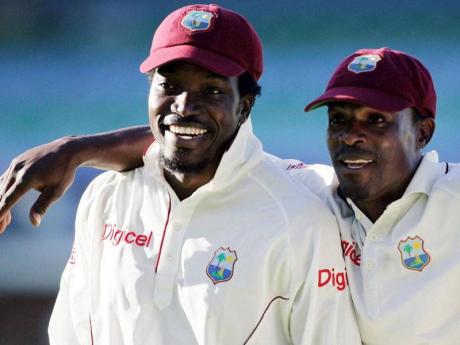 Morton (right) and Gayle while representing the West Indies. - File

Morton died two weeks ago in Trinidad and Tobago when the car he was driving crashed into a utility pole along the Solomon Hochoy Highway in Chase Village in central Trinidad. He was 33.

The Elquemedo Willett Park was filled with hundreds of mourners who turned out to pay their last respects to the cricketer, who was only the sixth from the tiny Caribbean island to play Test cricket.

St Kitts and Nevis Prime Minister Denzil Douglas, who delivered one of the tributes, was among the mourners.

Premier of Nevis, Joseph Parry, was also in attendance, along with Sports Minister Hensley Daniel and former Premier Vance Amory, who delivered the eulogy.

Former West Indies captain Chris Gayle flew in for the service and delivered one of the tributes.

Carl Tuckett, the Nevis-born fast bowler who played a single one-day international (ODI) for West Indies 14 years ago, was present along with former Windies all-rounder Omari Banks, who played alongside Morton for the Leeward Islands.

Amory, who attended the thanksgiving service for Morton in Trinidad last week, described the cricketer as "unique", stressing throughout his speech that "there was another side to Runako".

"He was not all aggression once you got to know him. You would have known that he was a unique and special person who loved family and friends with passion," Amory said.

Morton played 15 Tests and 56 ODIs for the West Indies in a career spanning nine years and last wore maroon colours in a Twenty20 International against Australia two years ago.

He moved to Trinidad about five years ago to live and last year made his first-class debut for the twin-island republic.

He was buried in the cemetery of St George Anglican Church.