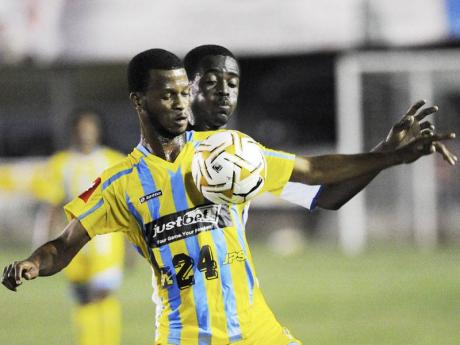 Waterhouse's Theo Brown controls the ball on his chest as he is challenged from behind by Portmore United's Adoah Nickle, during the Red Stripe Premier League football match at Drewsland Stadium on Sunday. Portmore United won 2-1. - Ricardo Makyn/Staff Photographer

Ewan Grandison's 62nd-minute strike in Portmore United's 2-1 win over Waterhouse on Sunday in the Red Stripe Premier League (RSPL) accomplished a number of things for himself and his club.

That single blow killed the RSPL title challenge of their opponents Waterhouse, contenders Boys' Town, erased the memory of Michael Campbell's strike against his club on Monday, presented a strong case for goal of the season and, most important, gave Portmore United all three points.

Struck from close to 40 yards, Grandison's effort, a combination of beauty and brutality, flew into the pigeon hole to goalkeeper Richard McCallum's net and relegated him to the role of spectator alongside the other 20 players and the gathered fans at Drewsland. McCallum could do nothing but look on in admiration and disgust before retrieving from his net. It was that good.

"I think the difference in the game was the second goal. It was just a stunning goal. It was an amazing goal, and you just cannot take anything away from the kid, and that was the difference today," Waterhouse coach Donovan Duckie remarked gracefully after his team's loss.

"It was a brilliant finish from Grandison in the second half and that's a match winner," was the take of Calvin Lewis, Portmore United's coach, on the strike.

The win, which pushed Portmore United to 60 points and gave them a 10-point lead over second-place Boys' Town - with eight games to go - leaves them in an almost-unassailable position.

Besides Grandison, Alanzo Adlam was also responsible for Portmore's victory as he opened the scoring in the 20th minute. Damion 'Cappo' Williams (50th) scored for Waterhouse.

"It is a very important victory for us tonight. I think we really worked hard for it," Lewis said of his team's victory.

"We were without Tremaine Stewart tonight, but Stephen Williams went in and put some pressure on the Waterhouse backline, and I must commend him for that," he added.

Duckie said his team started out tentatively, but responded well in the second half and had the better of play. Despite his team slipping to fourth and a 15-point gap opening between them and the leaders, Duckie refused to rule out Waterhouse's chances of taking the title.

"I would not say there is no championship in sight for us. The lead is now 15 and we have eight games to play, and three times eight is 24 so they can have a bad run. So it is not mathematically impossible, so I wouldn't say that," he said defiantly, even though his team is on 45 points.

Duckie did concede, however, that their task became much more difficult after Sunday's loss.

"It gets more difficult for us but it is not over. We can win the championship. If we cannot win, the possibility is there to get a top-two finish. We have to look towards Sporting Central (Academy), refocus the team and try to come out with three points," he reasoned.