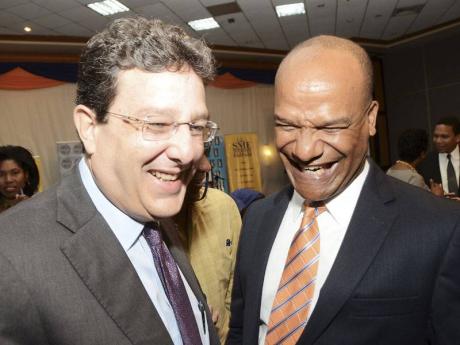 In keeping with its push to increase the rate of tax compliance, the Private Sector Organisation of Jamaica (PSOJ) has told its more than 200 members and associates to pay what they owe to the Government or risk getting kicked out.

As part of its recommendations for tax reform, the PSOJ and other entities, through a Private Sector Working Group, have argued that all registered companies should file annual income-tax returns.

But now the PSOJ is prepared to go further and its president, Joseph M. Matalon, yesterday announced that the body's governing council has decided to ensure that its members are tax compliant.

"At its meeting last Thursday, (the PSOJ Council) passed a resolution that requires that all member companies - in order to maintain their membership in the organisation - provide evidence of their tax compliance," said Matalon, who was speaking at the PSOJ Chairman's Club Forum at The Jamaica Pegasus hotel in New Kingston.

Matalon has repeatedly led the PSOJ's push for greater tax compliance and the organisation - which represents approximately 170 companies, 65 associate entities plus several individuals - is adamant that more persons need to pay their fair share of taxes.

Only 10 per cent file

The private sector group has charged that, of the 62,477 companies registered in Jamaica only 17,000 are registered for income-tax purposes.

"Of those 17,000, only 6,000 or approximately 10 per cent of the entire registered company population actually file tax returns on an annual basis," Matalon told a parliamentary committee recently.

"We estimate that approximately half of those filings return nil returns.

"The implication is that only about 3,000 companies, that is about five per cent of registered companies in Jamaica, pay any tax at all," added Matalon.

The PSOJ has also suggested that the Government eliminate waivers, cut the General Consumption Tax rate from 17.5 per cent to 12.5 per cent and remove exemptions from several products.