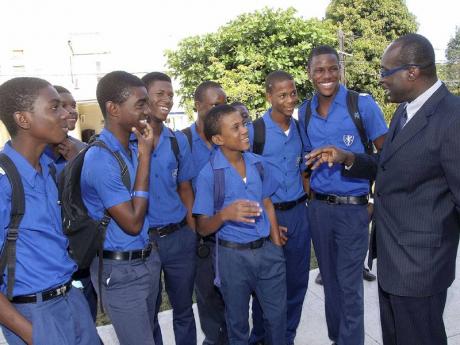 Ruel Reid (right), principal of Jamaica College, encourages some of his students from the lower school after a crusade at the St Andrew institution yesterday. 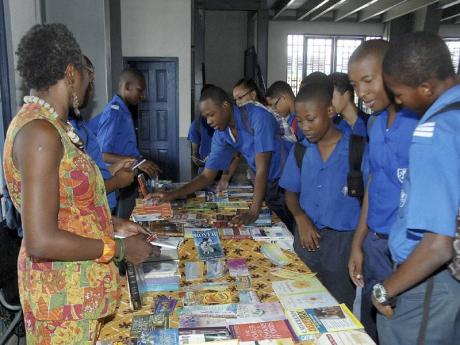 The young men of Jamaica College were overcome with the spirit-filled gospel yesterday morning during a crusade held inside the Old Hope Road, St Andrew, school's Karl Hendrickson Auditorium.

Several made a commitment to live Christian lives.

"It was very touching. It convinced me to repent of my sins. I don't really go to church but now I want to go to church because of the crusade," 15-year-old third-former Shervar Salmon shared with The Gleaner.

For 13-year-old first-former Brandon Christie, he said, "I thought the service was good because most of the boys that come to Jamaica College don't really have any time with God because they don't really go to church. So I think this is a good idea because a lot of (boys) nowadays are picking up the guns and not doing well in school. I think they should have it every year and every school should follow."

Held under the theme 'Young, Wise and Under God', this was the fourth annual staging of the two-day crusade, which continues tomorrow for the upper school.

Principal Ruel Reid deemed the crusade extremely successful, as he witnessed several of his students from the lower school give their lives to God.

"Based on the temptation and challenge that young people face, locally and globally, we feel that a spiritual consciousness and a spiritual power give them that enabling capacity so that they can more successfully journey through life," he said.

"Many of them made the decision to become Christians, which adds to the character of the school and helps in the reinforcement of discipline, the ethics of excellence, as we strive to be the number-one school in Jamaica, the Caribbean and the world."

Reid said he would like to see the crusade used as a template for other schools.

"We pride ourselves as being a Christian country, so we should not be afraid to present these principles to the students in this way," he added.

At the end of the hour-and-a-half-long service, which saw the Reverend Franklyn Jackson delivering an inspiring message, several students stayed behind to purchase the inspirational literature that was on offer.

"It was as good as last year. It was very good to hear somebody praying for me. I think this is a very good idea," noted 13-year-old third-former Alex Narcisse.

"It was very helpful because it actually tells you how to behave and carry yourself, and teach you things you need to learn in life," said 13-year-old second-former Romaine Graham.

Brian Reid, 14-year-old third-former, stated: "It is a nice way to get the students to understand about Christianity, and I think it will help them to change and become Christians, go to church and respect God."

Fifteen-year-old third-former Oshane Crawford said: "I feel that it has inspired many of the students because me myself inspired my friend to become a Christian. I try to tell him that he should seek salvation and salvation will come to him."