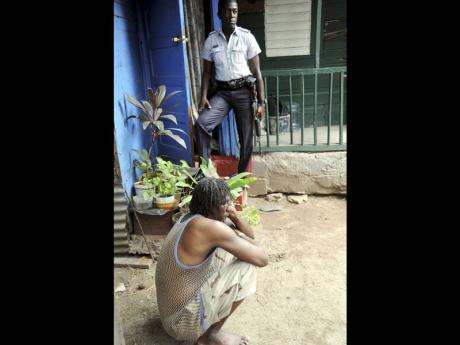 Robert Mullings (foreground) seems to be in disbelief after Cynthia Gayle collapsed and died at her home in Drewsland, St Andrew, yesterday. - Norman Grindley/Chief Photographer

For the second time in just over 24 hours, the St Andrew South police were summoned to a scene where a woman collapsed and died from undetermined circumstances.

On Monday, 25-year-old Kay-Ann (Shaki) Anderson was pronounced dead on Ken Hill Drive in Pembroke Hall after she collapsed.

Yesterday, 48-year-old Cynthia Gayle was added to the statistics as she collapsed and died in her house inside Holt Lane in nearby Drewsland.

"I was leaving the house this morning (Tuesday) and as me leave the bathroom, me see her and tell her later," Julie Smith, the landlady of the Holt Lane premises, told The Gleaner.

"While me at work, me uncle call me and say Cynthia see two miss call and she say she ago call back her daughter, then she just start tremble and go lie down in the bed and dead," added Smith.

Police on the scene in Drewsland were awaiting medical personnel to determine the cause of death, but no one could miss the similarity to the death which had occurred metres away just a day earlier.

"This no real. Two woman just dead so within a day," said one man as he watched the police go through their investigations.

He was referring to the death of Anderson, who complained that she was not feeling well on Monday before collapsing on her way to a bathroom at the Boulevard SuperCentre.

Anderson had worked as a bartender in nearby Maverley and residents there remembered her as 'Shaki', a fun-loving, jovial person.

It was a similar story for Gayle who residents of Maverley said was not known to suffer from any major illness and was also fun-loving.

The causes of the two deaths are yet to be determined.