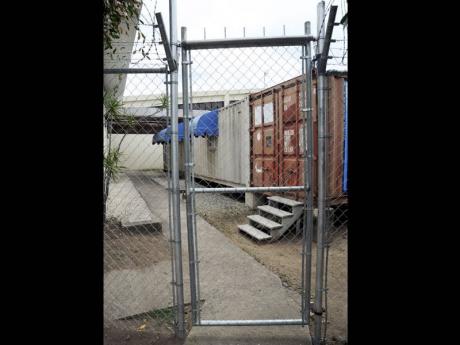 The locked gate preventing persons from entering the Jamaica House media centre from the back. - Norman Grindley/Chief Photographer

New security measures have been put in place at the Office of the Prime Minister (OPM) after an audio mixer disappeared or 'was stolen' some two weeks ago.

"We are not going to say that it has been stolen but we have not been able to determine what has happened to the expensive mixer," an OPM source told The Gleaner yesterday.

According to the source, the police have been called in and are investigating but the lawmen have not been able to determine what happened to the mixer which was located in the control room at the media centre at the OPM.

"This is not the first time that something has been stolen, because we have lost laptop computers and other small things but this is the most expensive and largest thing we have lost," said the source.

"It is not like this (audio mixer) could be moved out in your bag so we are at a loss to determine what happened," said the source.

Since the mixer disappeared, a new security system has been installed restricting entrance to the media centre at the OPM.

A metal fence now forces visitors to the media centre to use the main entrance rather than the back entrance that persons were used to.

Increased vigilance has also reportedly been implemented for persons entering or leaving the compound.

This is the second time in four months that increased security measures have reportedly been implemented at the OPM which has its main entrance on Devon Road.

Last November police sources reported that security was tightened after a bomb threat forced an evacuation of the office which was occupied by then Prime Minister Andrew Holness.

The prime minister was not there at the time of the bomb threat but staff members were evacuated while the police searched the premises.

No explosive device was found that time around.

OPM officials have installed a makeshift system to ensure the press briefings can take place in the media centre until the audio mixer is replaced.