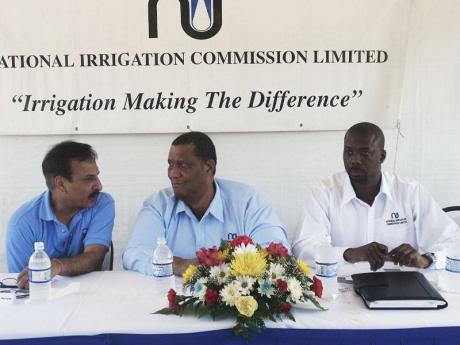 SOME 300 farmers in St Elizabeth are expected to benefit from a rainwater harvesting project.

The $4.5-million project, to be undertaken with support from the United Nations Global Environmental Facility, will involve resuscitation of a six million-gallon catchment tank located in Lititz, for the harvesting of rainwater for irrigation purposes.

The scope of work will include repairing cracks in the tank, bushing of the premises and removal of debris, erecting a security fence, installing a solar pump and conveyance system, and designing and installing a gravity drip system.

In the southern section of the parish, which accounts for the greatest farming production, farmers are severely hampered by the dry conditions.

Water has been scarce and farmers have had to employ creative measures to survive.

Minister of Agriculture and Fisheries Roger Clarke said the undertaking was significant "as it will provide a scarce resource to a resilience set of farmers".

He pointed to the need for unused catchment tanks across the island to be put into operation so that there can be an increase in rainwater harvesting.

The rainwater harvesting project, which will be implemented by the Forestry Department, was borne out of a need to address the problem of land degradation, by introducing farmers to best practices in drip irrigation and land husbandry. It is slated for completion in June 2012.

Marilyn Headly, chief executive officer and conservator of forests, Forestry Department, said the project was part of an overall objective, which was to "enhance sustainable land management", which includes water management.

This was endorsed by Dr Arun Kashyap, resident representative of the United Nations Development Programme, who said water management was not just about what we use, noting that it should be included in everything that we do.

Mayor Jeremy Palmer, who has always been vocal about the need for water sources in the arid parish, emphasised the need to preserve every source of water, since "the water table is not high and rainfall is minimal".

Farmer Simon Barnes said the programme has lasting benefits to the community. According to Barnes, he usually pays $4,000 for a 2,000-gallon drum of water.