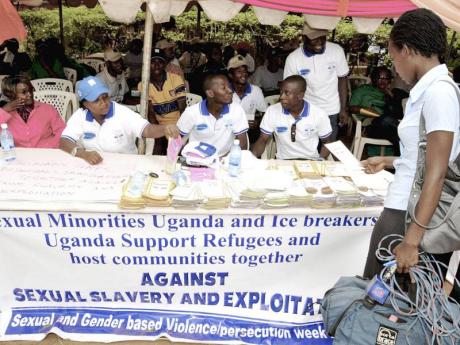 Members of Sexual Minorities Uganda, a gay advocate non-government organisation at the opening of the fourth annual sexual and gender-based violence/persecution awareness campaign week in the capital city Kampala, Uganda, on Monday. - Ap

Four years ago, Frank Mugisha begged his colleagues to join him for his first demonstration in support of gay rights in Uganda. Only four came along.

This week, during a march against gender-based violence led by the gay advocacy group Sexual Minorities Uganda, the Ugandan activist saw more than 30 colleagues walk the streets of Kampala holding pro-gay posters.

"For us, this is a sign of progress," Mugisha said, pointing to the white tarpaulin under which his group assembled after Monday's hour-long march. "We are no longer afraid of anything. We even have a banner."

Uganda's homosexuals have been in the spotlight since a parliamentarian introduced a tough anti-gay bill in October 2009. World leaders condemned the proposed legislation, though many in Uganda applauded it.

Still, Mugisha carries a sense of optimism that is slowly germinating within the tightly knit gay community. The mere fact, Mugisha said, that Ugandans are now having a national conversation on gay rights is itself an achievement. In the past, the subject was taboo.

"We see a shift in public opinion, and I guess it's because many Ugandans are talking about homosexuality a lot," he said. "There are some local leaders who are now willing to meet and talk to us. The only problem we have is the belief people have that we are promoting homosexuality and recruiting children."