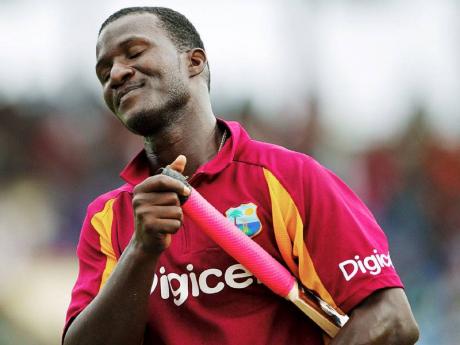 West Indies' captain Darren Sammy reacts with frustration at the end of the third one-day international cricket match against Australia in Kingstown, St Vincent, yesterday. The match ended in a tie. - AP

The West Indies and Australia played out a thrilling last-over tie yesterday in the third one-day international at the Arnos Vale Sports Complex.

The hosts, chasing 221 to win, were bowled out for 220 off the fourth ball of the final over when captain Darren Sammy was run out after a mix-up with last man Kemar Roach.

"I won't lay blame on anybody," Sammy said. "I think that we played a fantastic game. I'm just disappointed that as a team we didn't manage to push through in that final over."

West Indies captain Sammy said he was happy with the resilience his side showed after they had slipped to 78-5.

"We kept on believing while we kept losing wickets," he said. "The way everybody played down to number 11 showed the belief of the team."

Australia's top scorer Michael Hussey had mixed feelings about the result, which leaves the series delicately poised at 1-1 heading into the final two matches in St Lucia.

"When they needed one off only two or three balls to go, it sort of seems like a bit of a win at the end," he said. "I don't know how to feel really. It's a bit of a strange one.

"I felt like we should have won and then, to hang on to the tie at the end is a good result for us."

The West Indies' pursuit got off to a sound start from Charles and Kieran Powell, who added 27 in seven overs before Powell fell to a clever change of pace from Doherty, beaten and stumped.

Watson tightened Australia's grip with two wickets in one over to remove Samuels and Darren Bravo, and when Watson claimed Charles five short of a maiden half-century and Dwayne Bravo edged Doherty to the wicketkeeper, Australia were well on top at 78-5 in the 21st over.

But the West Indies, buoyed by a capacity crowd of 11,000, fought back.

Baugh forged crucial partnerships with the more aggressive Pollard and Russell. He and Pollard added 39 for the sixth wicket before Pollard's aggression got the better of him and he holed out off Nathan Lyon.

Baugh and Russell were even more productive in adding 64.

McKay returned to claim Russell and Baugh to tilt the balance back to Australia at 190-8 and 31 needed from 31 balls, but captain Darren Sammy and tail-enders Sunil Narine and Kemar Roach provided spirited resistance.

Narine struck two fours, but he fell to Brett Lee with 16 still needed from 20 balls.

Roach and Sammy nudged their team towards the finish, Sammy lashing Lee for a four wide of mid-on to tie the scores with three balls left.

But the jumping crowd was soon silenced when Sammy drove straight to backward point and froze while Roach sprinted for a single.

George Bailey lobbed to Lee to complete an easy run-out and the match was tied, the third between these countries in 128 one-dayers between the teams.

Earlier, Australia lost early wickets after opting to bat first. Watson was run out for 10 by Andre Russell's fantastic pick-up and direct hit from mid-on at 34-1.

Wade fell cheaply after being promoted to No. 3, bowled by Narine behind his back. When David Warner, who hit six fours in 37, slapped Darren Sammy to backward point, the hosts were on top at 58-3.

But Hussey, the eventual Man of the Match, and Bailey revived the visitors in a level-headed association. Left-hander Hussey was first to his 50, off 76 balls, followed next by Bailey, who took 81 deliveries.

Hussey's dismissal by Samuels sparked a late collapse which saw five wickets tumble for six runs. Daniel Christian hit a late six in 12 off 14 balls, but Australia, well placed at 170-3 in the 40th over, subsided to 220 all out.

The five-match series now moves to St Lucia, where the fourth match will take place on Friday.

Man of the Match: Mike Hussey.