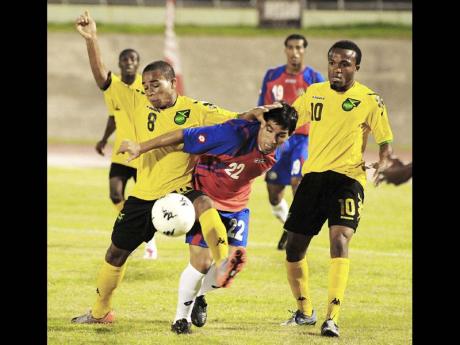 Jamaica's Eric Vernan (left) wrestles Alvaro Sanchez of Costa Rica off the ball as teammate Dane Richards (right) reacts, during a friendly international football match at the National Stadium in Kingston in September, 2010. Jamaica won 1-0 then, thanks to a Ryan Johnson goal. - Ian Allen/Photographer

Jamaica's Reggae Boyz will be in the hunt for a fourth consecutive win when they tackle Costa Rica's Los Ticos in a friendly international, scheduled for an 8:00 kick-off tonight at the National Stadium.

Following a dismal run of form that led to the team losing five games in a row, things have looked a lot better for the Boyz in recent weeks. Back-to-back wins over Cuba, at the National Stadium and Montego Bay Stadium, were followed by an impressive 3-2 away win in New Zealand.

Perhaps an even more encouraging sign for national coach Theodore Whitmore is the number of young, local-based players who have taken the opportunity to get themselves on the scoresheet after somewhat of a goal drought for the black, green and gold-clad unit.

Kingston College schoolboy Jorginho James, Portmore's top scorer Tramaine Stewart, Navion Boyd, Je-Vaughn Watson and Xavian Virgo have all added to the team, scoring seven goals in their last three encounters. Prior to that, the team had managed just three goals in the previous five matches.

It remains mostly a local-based squad that will play their 20th match against Costa Rica, a team that incidentally handed Jamaica one of their biggest defeats in history, a 9-0 loss in San Jose in 1999. Defender Jermaine Taylor and Watson are the overseas-based players included for the friendly. Efforts were made to get Nigel Neita - an 18-year-old forward from English Premier League club Arsenal - for the match, but he was not released by his club, as well as goalkeeper Donovan Ricketts, who is recovering from a knock suffered in his Major League Soccer match at the weekend.

Initially, it had been hoped that midfielder Keammar Daley, who plies his trade for Preston North End, and Stoke City's striker Ricardo Fuller would have been able to join the squad, but both players' clubs turned down the invitation. Although currently on a three-match ban, Fuller was not allowed to join the team due to his club's current fixture list, while, according to Preston, Daley is said to be up for a loan transfer.

Currently ranked six places above the Costa Ricans at 54th, the Jamaicans won the last meeting between the two, a 1-0 victory in last summer's Gold Cup.

However, the Central Americans edge the overall record with eight wins, compared to Jamaica's six, while the countries have drawn on six occasions.

Both teams will be continuing their preparation for the third round of the CONCACAF World Cup qualifiers, with Jamaica set to kick things off against Guatemala on June 8 in Group A. Costa Rica have been placed in Group B and will play away to El Salvador on the same date.