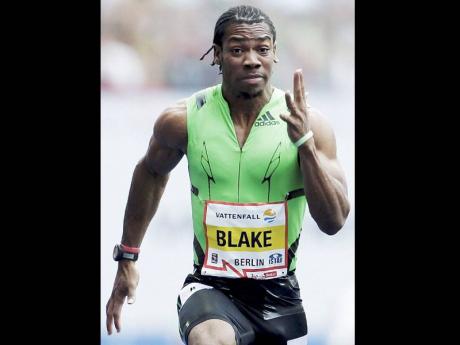 World 100-metre champion Yohan Blake will be the headliner at the inaugural staging of the Donovan Bailey International track meet scheduled for Edmonton, Canada, on June 16.

Blake's confirmation was announced at a press conference yesterday at the University of Alberta's Foote Field that was also used to promote the Edmonton International Athletics Festival.

"I am very excited to come to Edmonton and run," said Blake, who will be looking to add to the 100-metre gold medal he won in Daegu, South Korea, last August when he competes in London this summer.

"I've heard nothing but good things about the city and I am looking forward to experiencing Canada for the first time."

Meet ambassador Donovan Bailey, the 1995 World 100-metre champion and 1996 Olympic champion and a former world record holder, says the meet has come about because of the great relationship he shares with the city of Edmonton.

"A great partnership has been created between me, the city of Edmonton, province of Alberta, Athletics Alberta and other corporate partners," he said. "This is also the city that I retired in back in 2001."

Bailey was born and grew up in Jamaica, where he attended Knox College, which he represented at the Boys' Championships in 1981. He migrated to Canada that same year. He went on to represent Canada well internationally, winning a number of global titles.