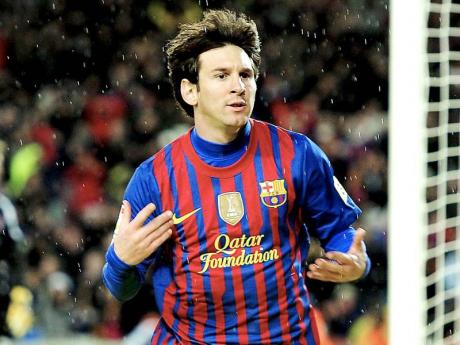 Lionel Messi hit a hat-trick to become Barcelona's all-time leading scorer and keep the defending Spanish champions in the title chase with a 5-3 win over Granada yesterday.

Messi set up Xavi Hernandez's opener before extending Barce-lona's lead in the 17th.

And after Granada surprisingly rallied with two quick goals after half-time, Messi scored twice more to secure the win, recording his eighth hat-trick of the season.

Barcelona's sixth consecutive league victory reduced leaders Real Madrid's advantage to five points, turning up the pressure on their arch-rivals to avoid a costly slip at Villarreal yesterday that would tighten the title hunt further.

A three-time FIFA player of the year, Messi has 17 goals during a seven-game scoring streak and leads La Liga with 34 goals, two ahead of Real Madrid's Cristiano Ronaldo.

The hat-trick was Messi's 18th for Barcelona and gave him 154 goals in his last 153 games over three seasons. His six hat-tricks in La Liga this season tie the record set by Ronaldo last year.

Barcelona's players wore shirts saying "Fabrice!!! We are behind you" before the game in support of Bolton player Fabrice Muamba, who is recovering from cardiac arrest three days after collapsing on the field during a match.

Earlier yesterday, Osasuna were held to a 0-0 home draw by Getafe.

Also today, it's: Real Sociedad vs Levante, Valencia vs Zara-goza, Atletico Madrid vs Athletic Bilbao and Sporting Gijon vs Mallorca.

Tomorrow, it's: Racing Santan-der vs Sevilla, Real Betis vs Espanyol and Malaga vs Rayo Vallecano.