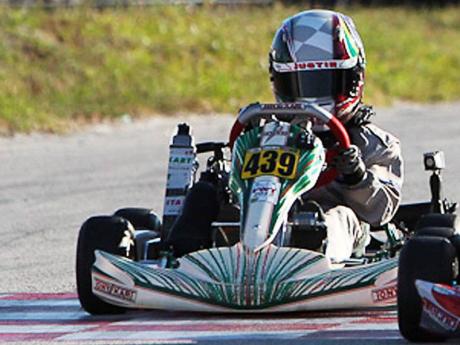 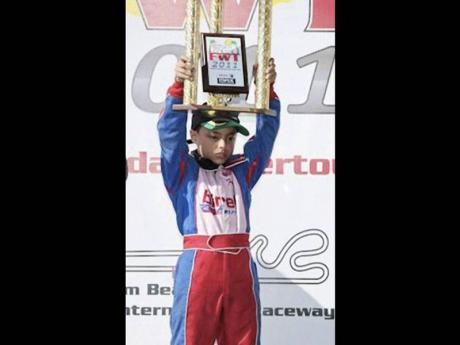 Immediately after crossing the finishing line, his parents Steve and Lisa said they hugged, screamed, jumped and punched the air in jubilation.

"It was a happy moment for us. All the hard work and money spent has reaped dividends," said Lisa, who admitted being "on edge" throughout the race.

Though the family has not yet celebrated the milestone achievement formally, Lisa stressed that it is back to school for her pint-sized son, who is now doing his internal exams.

Another element in Sirgany's success was the pep talk from his tuner, Peter Rae, which helped the St. Andrew Preparatory schoolboy to drive a patient and tactical race, then produce a late burst in the closing stages to flash past the winning post in second position behind the United States' Harry Coulton.

"All he needed was to finish at least eighth in the finals and we would've won the championship," boasted Rae.

His sweet victory will remain in the back of the minds of many motorsport enthusiasts and go down as one of Jamaica's powerhouse performances on the world stage in go-karting.

The effort also propelled Jamaica to fourth place in the championship behind the United States, Canada and Venezuela, respectively.

There were karters from 27 countries, representing all six karting continents. There were drivers of diverse ethnic backgrounds. Among the countries Jamaica beat in the championship standings were the United Kingdom, Australia, Mexico, Brazil, Argentina, China, South Africa and Japan.

Other members of the Jamaican team were Joshua Sirgany, Thomas Issa, William Myers, Fraser McConnel and Collin Daley Jnr, who all did well and kept the nation's flag flying high.

"Congratulations to everyone who helped to achieve this fantastic result," commented Neil Williams, president of the Jamaica Karting Association (JKA). "This is a big achievement. When a little country like Jamaica with limited resources and karters can achieve this, it demonstrates the abundance of talent we have here."