Have an Irie CosMo! 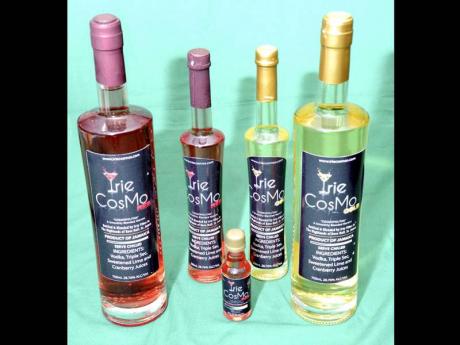 Made in Jamaica, the gold and red Irie Cosmos are available in sizes to suit your preference. - Norman Grindley / Chief Photographer

Imagine having your own martini right at your disposal. Just think of not having to go through all the trouble of making one from scratch when entertaining, but instead pouring it straight from the bottle.

Just think Irie CosMo! Irie CosMo, distributed by Irie Vibes is a bottled martini, and according to owners and distributors, Lisa and Leighton Perrins, it is Jamaica's first, made right here in the island.

Originating from a concoction used for many years, the two decided that they wanted to turn this into a business venture. Lisa, who now lives in Jamaica, is a native of the United States and based on her experience with cosmopolitans, she realised that there was an issue with consistency in taste.

So after moving to her husband's homeland and then being subsequently joined by him when he returned from the United States, the two decided to focus on their business plan.

Acknowledging that the local market is more accepting and gravitates to more rum-based products, the duo was set on creating and satisfying a niche market.

Promoting their product as an exclusive product, Lisa boastfully says her cosmopolitans are the best in Jamaica due to its consistency. "When I came to Jamaica I went all over, from Negril to Portland, anywhere I could taste a cosmopolitan I was there and I must say that we have the best."

Made from vodka, triple sec, sweetened lime and cranberry juices, Irie CosMo has the basic ingredients used to make cosmopolitans. But what sets it apart from the others are the unique twists added, as well as the consistent nature where the taste and flavour will remain the same.

"Oftentimes when you order a cosmopolitan, you realise that the taste differs from place to place, even though they are basic ingredients, it is the proportion that makes a difference".

Available in Fontana Pharmacies and All Things Jamaican branches islandwide, it is hoped by the owners that business grows even more.

At present, promoting the drink really centres around drink-tasting at private parties.

Ready to aggressively take a piece of the alcohol market, Irie Vibes knew how important packaging and taste are. And to meet a high standard they imported bottles from Italy which they received in December. "The options here weren't many, they were like pepper sauce bottles." noted Lisa.

Available in red and gold, Irie CosMo also comes in three sizes. Persons can also opt to buy the Irie CosMo gift set which includes shaker with two martini glasses. This is said to be convenient for home use. And if you are worried about hangovers, just drink and be content because it is said that this drink will only create a buzz with no end result of a hangover.

As part of their promotion, some members of The Gleaner's editorial team sampled the IrieCosmo and below are some of the responses.

Irie CosMo (gold) is a really delicious blend of some good ingredients - smooth, sweet, really makes me feel 'irie'. I'm glad it's something elegant and refined that we can call Jamaican.

The drink was smooth and mixed nicely. While you could taste the liquor, it was not too much and the citrus gave it the right amount of tanginess. It is also a convenient drink to have at home.

I thought the drink was nice. Full-flavoured, with a fruity and zesty taste. Alcoholic content was good too. I could taste the liquor but it wasn't overbearing.

It is not nice. It reminds me of cough syrup that I got as a child, and I really was not a fan of medicines.

Quite refreshing, with just the right amount of alcohol.

Love the aroma and it also tastes good Thumbs Up.

Nice lemon flavour and is smooth. I can see myself drinking this regularly.

A crisp, almost grapefruit-like taste. Probably a drink for the ladies. Not much alcohol in sample, but could prove a creeper.

I like the aroma of the cosmopolitan and it has a nice taste, which leaves a warm feeling on my chest.

I am not a lover of alcoholic beverages, but this one is very refreshing and not as harsh as others that I have had.

It's tangy yet strong, but love the flavours; hate the fact that the taste doesn't linger though; it's as if I didn't drink any alcohol.

It's actually a nice blend ... I like it, even though I am not an alcohol lover.