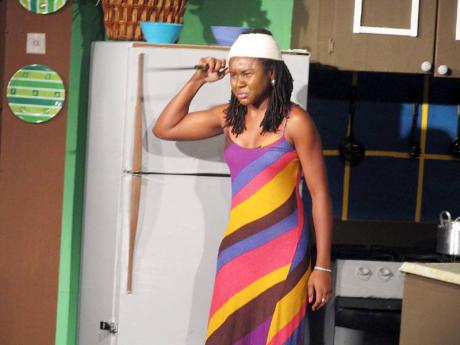 Georgia, the daughter of Valarie, played by Sabrena McDonald, pulls a knife during a scene from 'God's Way'. - Photo by Marcia Rowe

Following its successful run in Jamaica, the powerful gospel drama God's Way heads to Florida for two shows on the Easter Weekend. Performances are scheduled for April 7 at the South Miami-Dade Cultural Arts Centre and on April 8 at the Coral Springs Centre for the Arts. To be hosted by Jamaica Awareness Inc, the performances form part of the Jamaica 50 celebrations in South Florida, and local producers DMH Productions are honoured to be involved in the activities.

"Jamaica Awareness has a reputation for hosting quality productions and guaranteeing that audiences receive only the best out of Jamaica. These performances of God's Way underscore their commitment to affording all Jamaicans, including the Christian community, an opportunity to celebrate a significant milestone in Jamaica's history," a release from the group read.

A show for the entire family, God's Way is the second production written and directed by Dahlia Harris to grace the South Florida stage, following encore performances of Judgement last year.

According to Harris, this performance will be equally compelling.

"The feedback has been overwhelming with respect to the way the show has ministered to our audiences, both Christian and non-Christian. It's a boost of faith in a time when many are facing various challenges in their lives. It is impossible to leave the show and not be re-energised physically and spiritually," said Harris.

Starring Harris, Sabrena McDonald, Ainsley Whyte and Trudy Campbell, God's Way is an examination of how often faith is tested and how the decisions we make may either lead to a loser relationship with God or separation from His grace.

The play has received rave reviews from critics and audiences alike, and raises important issues of family, friendship and marriage.

Clips from the show and information on the performances are available at jamaware.org.