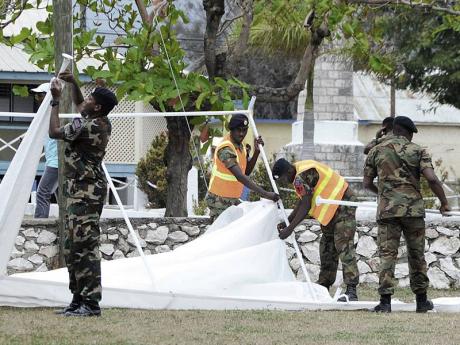 Jamaica Defence Force soldiers attend to an Electoral Office of Jamaica tent that was knocked down by a strong gust of wind at Up Park Camp in St Andrew where there was little activity taking place on election day for members of the security forces. Ricardo Makyn/Staff Photographer

Retired Police Sergeant Velma Bedward-Williams went to the Linstead Methodist Church Hall in St Catherine to cast her ballot early yesterday afternoon, but did not find her name on the voters' list.

"My name was on the list that the outdoor agents had, but when I checked inside, I was told that they did not have my name on the master voters' list," Bedward-Williams explained to The Gleaner.

She said an official from the Electoral Office of Jamaica told her to check with the master voters' list at the Jamaica Police Academy (JPA) in Twickenham Park.

After a second attempt to exercise her franchise, Bedward-Williams' name was found on the police list at the JPA. She was assisted by Janice Shaw, voter location assistant.

"Mrs Williams did not find her name and she came to this polling division and we were able to find her name on the list without any problem, and she was able to cast her vote," explained Shaw.

Bedward-Williams, a resident of Linstead, was elated, as she had missed the opportunity to vote in the 2011 general election.

"I didn't want to miss the opportunity again, to exercise my right, because in the general election, I thought my name was on the civilian list because I retired in 2009, but when I checked the civilian list in Linstead, it was only on the outdoor agents' list and I never voted," she said.

In the meantime, Sonia Nelson, returning officer for St Catherine Eastern, told The Gleaner that only police who work in the St Catherine North Division were eligible to vote at the academy.

Some 1,182 electors were registered to vote at the JPA.