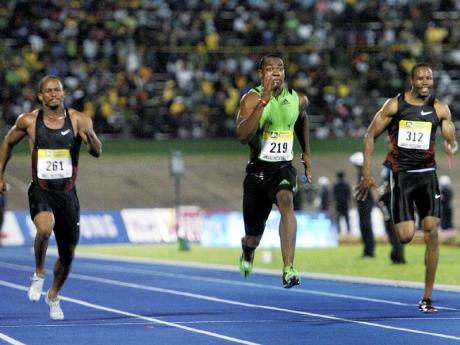 Already considered one of the top meets on the international track and field calendar, organisers of the recently upgraded JN Jamaica International Invitational are seriously eyeing another reclassification.

Promoted last year from an IAAF area permit meet to World challenge status, Jamaica Athletics Administrative Association (JAAA) officials are hoping that the nine-year-old event, which is set for May 5 at the National Stadium later this year, will meet the IAAF's lucrative Diamond League certification.

"I am quite pleased with how the event has developed. It has steadily grown in standing within the track and field world, it has moved from an area permit meet and now we are seeking Diamond League status," said JAAA president, Dr Warren Blake.

In addition to raising the overall appeal of the meet, an upgrade would also mean a bigger financial intake for the event and the ability to attract even bigger names to the country.

"With this change in status, it would mean that we can attract bigger athletes and international sponsors," Blake told The Gleaner.

"In getting this final elevation, it is really up to the IAAF because they look at your administration, the things that you put in place, the fact that we have regular drug testing and that the meet is well organised, events run on time and that there is proper crowd control. All of these things are considered," he explained.

Blake, who underscored the value of such a classification, also took time to point out the sentimental worth, given the fact the meet was a brainchild of former JAAA president, Howard Aris, who passed away late last year.

"It (pushing for upgrade) is something that the entire executive had signed off on and it would be a fitting tribute to Mr Aris' honour that we do achieve this status in short order," said Blake. "I know that if he was alive he would push for it and it is something that we are really hoping to achieve in the very near future."

Organisers have already started to promote the meet and recently announced an impressive line-up of athletes for this year's event.