Is VCB the queen? 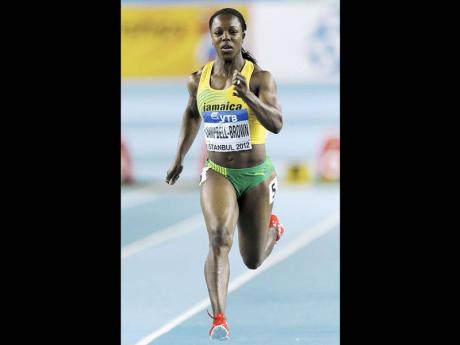 For most people, it's a no-brainer. For them, Veronica Campbell-Brown (VCB) is the finest Jamaican female sprinter of all-time and has overtaken Merlene Ottey as our queen of speed. The raw facts weigh heavily in VCB's favour, but a closer look narrows the gap.

VCB has done wonderful things. Twice Olympic champion at 200, she has also won World Championships at 100 and 200 for a grand total of four gold medals at the World/Olympic level. By comparison, Ottey has two gold medals, from the 200 at the 1993 and 1995 World Championships, respectively.

Under that 4-2 result are some important considerations. In the first half of Ottey's international career, the World Championships were held on a four-year rotation. Since the start of the 1990s, the meet has been held every two years.

More significantly, Ottey's medal take was reduced by the presence of persons now thought to be users of illegal performance enhancers. At the first World Championships in 1983, she was fourth in the 100 to Marlies Gohr and Marita Koch of East Germany and Diane Williams of the United States. Koch beat her to the gold in the 200.

In 1987, at the second World Championships, she lost the 100 to the East German pair of Silke Gladisch and Heike Dreschler, of long jump fame. According to previously confidential government papers released in Germany, all the East Germans were participants in a systematic steroid boosting programme from 1971 to 1990. When you add a confession by Williams of drug use in the 1981-1984 period, Ottey is left as de facto double World champion in 1983 and the 100-metre champion of 1987.

No one knows what the future will reveal but by all accounts VCB is competing on a more level playing field, having become prominent after the infamous Marion Jones era.

Indoor athletics is to track and field what T20 is to cricket, but those keeping check will find Ottey has a slight lead here. She has three World Indoor Championship gold medals, one from the 60 and two from the 200. After her recent 60-metre title defence in Istanbul, VCB has two.

You can decide if that overturns Ottey's productivity. The old queen broke 11 seconds on 67 occasions and surpassed 22 seconds in 16 outdoor races. VCB's figures are 33 and four.

On the flip side, VCB is only 30 and has packed in all her success in 11 short years, while Ottey was around for much longer. At the same stage, Merlene had broken 11 21 times and had dipped under 22 twice.

VCB will probably soon make such comparisons redundant. Her World Indoor victory could be the start of a triumphant year crowned with Olympic success in London. Next year will bring another World Championships, this time in Moscow, where the 20-year-old Merlene won her first major medal, an Olympic bronze in the 200 behind East German Barbel Wockel and Natalya Bochina of the USSR. The way Veronica is going, this conversation probably won't be heard again.