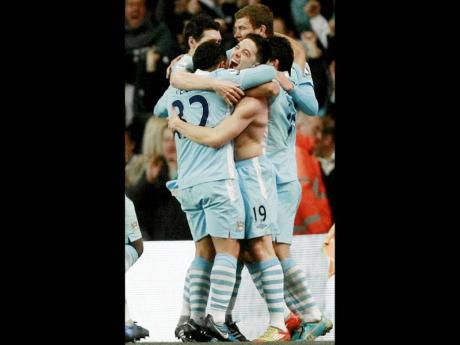 Manchester City's Samir Nasri (no shirt) celebrates with teammates after scoring a goal against Chelsea during their English Premier League football match at the Etihad Stadium, Manchester, England, yesterday. - AP

Chelsea led through Gary Cahill's 60th-minute deflected shot, but Sergio Aguero levelled the scores in the 78th with a penalty and Samir Nasri scored the winner seven minutes later following an exchange of passes with Carlos Tevez, who returned to action after six months away.

Arsenal moved up to a season-high third place with a 1-0 win at Everton, with Tottenham slipping to fourth after a 1-1 draw with Stoke City. Queens Park Rangers scored three times in the last 14 minutes to overturn a 2-0 deficit and beat Liverpool 3-2.

City have 69 points to United's 70 with nine games remaining. Arsenal are another 14 further back, but finally above local rivals Tottenham (54) after Thomas Vermaelen headed in from Robin van Persie's corner to secure a sixth straight league win. Chelsea stayed in fifth place with 49 points.