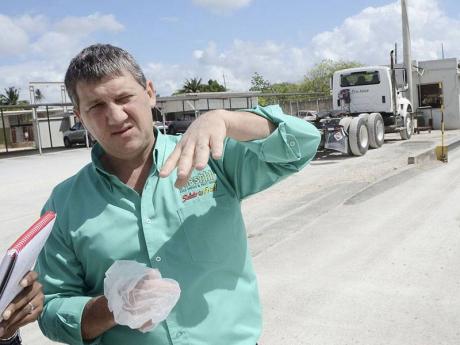 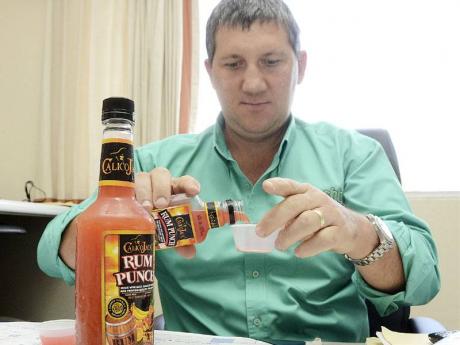 Peter McConnell prepares a sample of rum punch produced under the Calico Jack label at the company's factory in Bog Walk, St Catherine, on Monday, March 19. 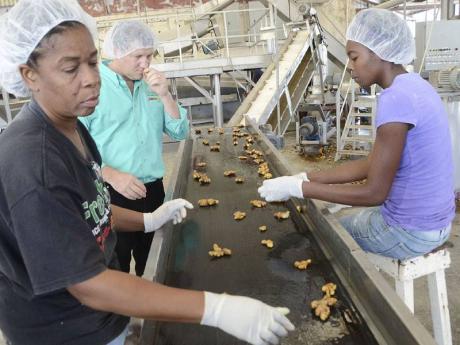 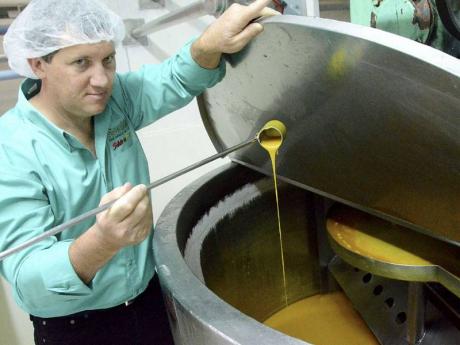 Peter McConnell shows off one of the vats filled with orange juice concentrate during a tour of the new wing of the factory at the Bog Walk, St Catherine complex. 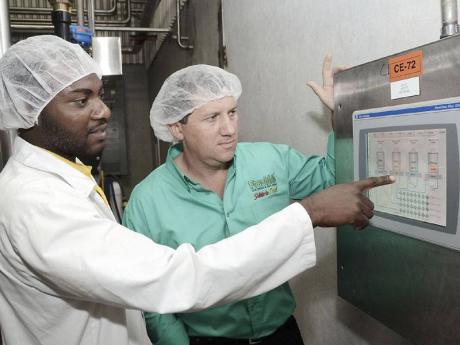 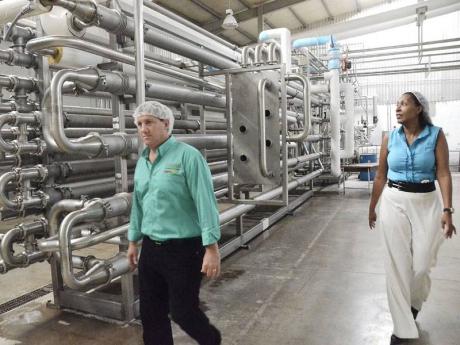 Peter McConnell and Kim Lee on the floor of the new wing of the citrus company's factory at Bog Walk, St Catherine. - photos by Rudolph Brown/Photographer 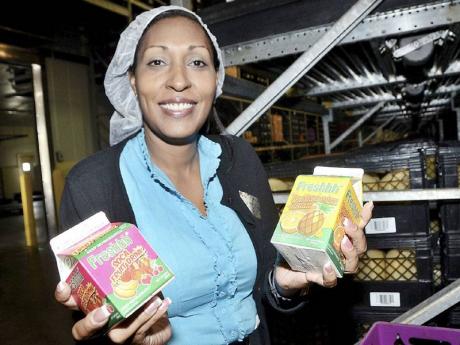 Marketing manager Kim Lee shows off two of the juices packaged under the Freshh label.
1
2
3
4
5
6
7

Citrus company Trade Winds has added a new wing at its plant to store the fruit concentrate it produces, and has automated the cleaning of some tanks used for storage as the McConnells look to wind down a three-year plan to make the operation more efficient.

Trade Winds Citrus Limited is spending J$250 million on the project, which concludes in December, financed from a combination of loans and internal resources.

"The bulk of the money was spent for the building, the new machines and labour," said managing director Peter McConnell.

"We upgraded our machines. Remember that most of our food is perishable so food safety is very important to us," McConnell said, bragging that Trade Winds was one of the first companies to achieve ISO and HACCP certification.

Before the improvement project, tanks were scrubbed manually, but the new equipment is computerised and cleaning is done at the touch of a button, as demonstrated on a tour of the new wing this week, hosted by McConnell and marketing manager Kim Lee.

"We are basically finished now. All that is left is for us to upgrade the blending room," McConnell said.

Trade Winds is Jamaica's largest manufacturer of freshly squeezed orange juice and orange juice made from concentrate. Its products span a range of juices, which are packaged and distributed under the brands Tru-Juice, Wakefield, Freshh, Jamaica Tea and Calico Jack.

Freshly squeezed orange juice is available only during the orange crop season - between February and June. Trade Winds uses about 200,000 boxes or half of the total oranges reaped from its orchards to make concentrate, which it uses forits own purposes but also sells to other juice processors.

McConnell declined to comment on the volumes involved. However, he said that Trade Winds sometimes imports concentrate in limited amounts to cover supply gaps.

The factory makes concentrate by sending freshly squeezed orange juice through an evaporator that separates 6 gallons of water from every 7 gallons of fresh orange juice.

The result is a concentrate that is thick and yellowish in colour, and sweet. The product is stored in drums and frozen for future use.

Under the upgrade, which started in 2010, Trade Winds has installed a fully automated pasteurisation and filling system, which includes four new filling tanks. This adds to the six previously installed, but those are semi-automated.

The new machines are operated using commands on a touch screen tablet hoisted at shoulder height on the wall.

"You just need to press the button and it prompts it to send cleaning solutions, water, juices, whatever you tells it to into the tanks," said McConnell, describing the operations of the new tanks.

The six older tanks are still cleaned manually. A worker climbs inside scrubs down the walls.

A 22,000-square-feet temperature-control room is also constructed on the new wing is also used as storage for finished products.

The plant has been restructured so that packaging of products is done in three 'bottling' rooms on the new wing instead of one: one for juice packaged in boxes; another for bottles; and the other for packaging beverage supplied to the food services industry.

The rooms used for boxes and bottles each have two packaging machines.

McConnell said that the main objective of the upgrade and expansion is not to add production capacity but to make the operation run more smoothly and potentially grow product lines.

"Right now the main thing we are doing is trying to improve efficiency and sanitation. The expansion has modernised our filling system - better efficiency, more sterile, better sanitation," he said. "Space capacity will allow us to expand into new product lines."

These new product lines, McConnell said, are "work in progress".

"This will not be the end, though, as in any modernisation factory, upgrading is an ongoing process."

In the meantime, the company is executing an internal energy initiative to conserve on electricity consumption.

"Since everything is powered by electricity we have to try to manage it. Our energy bill is a big problem. It is very high because we manufacture a chilled product and it is easily perishable, so food safety standards are critical to ensure that we achieve the shelf life that we set out to achieve," McConnell said.

Trade Winds Citrus employs up to 1,000 persons during the peak season when oranges are in season. The company handles approximately 400,000 boxes of oranges per year - 30 per cent of which are sold both locally and internationally as fresh fruit; 20 per cent is used as raw material for freshly squeezed juices, and the remaining 50 per cent as input for concentrate.

Some of the 400,000 boxes of oranges are bought from small farmers. Trade Winds says it spends more than J$100 million on fruit purchases from farmers, including oranges.

Its orchards spanning 2,800 acres of land bear mainly oranges but are also interspersed with other fruit trees.

The orchards have to be carefully managed to ward off diseases to which citrus fruits are susceptible, but they also face a human problem that McConnell highlights as one of his biggest headaches - praedial larceny.

He estimates thievery of fruit as a J$10-million problem for Trade Winds.

"That is a never-ending problem. Seldom is there a court day when we don't have a matter in court. We probably spend as much as we lose for this," he said.