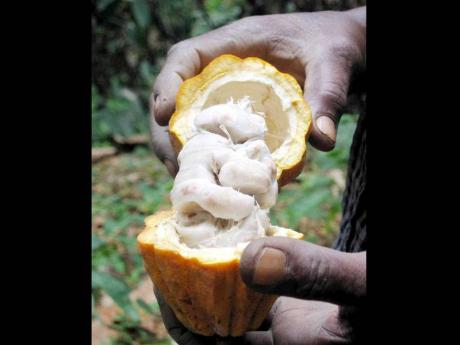 Jamaica produces cocoa at levels that is one-seventh of market demand, and the Ministry of Agriculture and Fisheries is moving to close the supply gap with backing of €300,000 (J$35 million) from the European Union.

The state-run Cocoa Industry Board will fund the other €50,000 of the €350,000 project cost, Agriculture Minister Roger Clarke said Tuesday.

Jamaica has a "guaranteed market of 1,400 tonnes" of cocoa, Clarke said, but only produces 200 tonnes annually.

The current project - dubbed Re-engineering the Cocoa Rural Economy through Agro-processing Eco-Tourism & Entrepreneurship, or ReCREATE - is targeted at tripling output to 600 tonnes over the next five years.

Jamaican cocoa is a top-quality bean fetching premium prices on the world market, but crop volumes have been inconsistent leading to missed market opportunities from overseas buyers.

Cocoa is used in the manufacture of chocolate, other food products and beverages.

Steve Watson, secretary manager of the Cocoa Board, said Wednesday that the markets were by no means guaranteed, but studies show that there is demand and increased international markets could be developed in the five-year period under planning.

"We at the Board have two buyers in Europe and the Jamaica Cocoa Farmers' Association (JCFA) has another two prospects. We are confident that the markets can be developed."

Under the scheme, slated to run until February 2013, the cocoa nursery at the Orange River Research Station will be upgraded and special varieties of cocoa plants at that facility as well as Montpelier expanded.

The agriculture ministry is inviting private-sector investment in the nursery operations.

The upgraded and new nurseries are expected to produce some 200,000 plants to put 510 new acres under cocoa, of which 300 acres will be rehabilitated in Clarendon and St Catherine.

The nurseries and farm operations are expected to create 150 jobs, while another 25 persons will be trained in business development as the industry looks to develop downstream or value-added cocoa operations.

Cocoa has declined substantially from the heydays of production. Recently, the JFCA has been openly critical of the Cocoa Board, which it accuses of stifling the sector with its marketing practices.

JCFA president Clayton Williams announced earlier this year that the association plans to outbid the board for supplies by offering farmers a higher price of J$2,500 per box or 25 per cent more than the J$2,000 paid by the Cocoa Board.

The board has traditionally bought 98 per cent of the local crop.

The five-year 600-tonne target will return Jamaica to performance levels last seen in 2010 when factory output was 572 tonnes, but it falls short of the 768-tonne high hit in 2007, according to Planning Institute of Jamaica data.

On Tuesday, Clarke said at the ReCREATE project launch that the agriculture ministry was committed to the expansion into value-added cocoa products, which requires the sector to be deregulated.

"We ought not to be exporting cocoa beans and then importing expensive chocolate bars. In this regard, the Government is committed to the divestment of the commercial assets of the Cocoa Board, as well as the deregulation of the marketing of cocoa, in order to attract investment in the production of higher-value products," the minister said.

Clarke said ReCREATE is the continuation of sector upgrades started in 2010.

"Through the USAID and the EU, we rehabilitated over the last two years nearly 2,000 acres of cocoa, benefiting 520 farmers and providing substantial support to the newly incorporated Cocoa Growers' Association. This has had the impact of moving production up substantially, with production in the first quarter of this crop up to December 2011 surpassing the total crop reaped the year before, " he said.