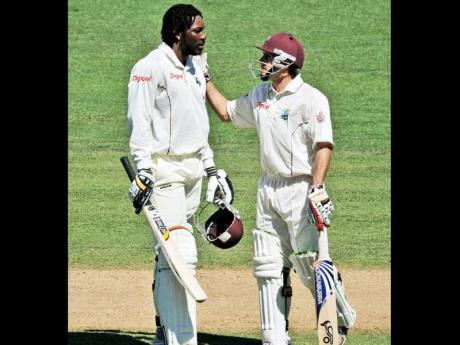 Chris Gayle's commitment to the West Indies cause is, unfortunately, once again coming into question. The details are sketchy, but it's understood that Gayle is now in a quandary as to whether to give up his overseas contractual arrangements in order to be available for the West Indies Test matches against Australia. His detractors are now keen to say, "I told you so."

We use the words commitment and loyalty quite loosely, and conveniently. Take the case of Brendan Nash.

All who have seen him play for Jamaica would never ever question his commitment to country. His work ethic in training is admired by all. His attitude to training and matches has rubbed off on the Jamaican team since he has been here.

Last year, when Nash was not selected for the West Indies, he opted out of the regional one-day tournament. His mindset, he said, was not on the task at hand. I didn't hear one person question Nash's commitment to the Jamaican team then.

This year, Jamaica are in the semi-finals of the regional four-day tournament and are within striking distance of snaring a historic fifth straight title. Nash recently got a deal with Kent. He has packed his bags and gone, and in all likelihood will miss the rest of the season.

Twice in less than a year, Nash, for his own reasons, has chosen to leave the Jamaican team, and I haven't heard one, single, solitary person question his commitment to the Jamaican cause.

I'm sure whenever Nash decides to make himself available for Jamaica again, he will be slotted in straight away, and the powers that be will understand that the man has to earn a living and that his going off to Kent does not necessarily constitute disloyalty to Jamaica.

But I go further. Both Marlon Samuels and Sunil Narine, as I understand it, will not be available for the West Indies against Australia in the upcoming Test series because of IPL contracts. There could be others as well. Why are we not commenting on their commitment?

We all accept that this is too good an opportunity for them to turn down. Isn't that odd? Why isn't the same reasoning applied to Chris Gayle? Why is Chris judged harsher than others around him for committing the same 'crime'?

The problem is not Gayle; the problem is us, and our own inability to think rationally where he is concerned, because as spectators we want to be entertained, above all else.

We look at what is best for us, not necessarily what's best for the sportsman. It's the kind of subconscious selfishness that typifies the average sports fan.

Whether we want to accept it or not, sports is changing, and Test cricket certainly doesn't have the same allure it once did. Times are changing, and sports lovers need to understand it.

The Commonwealth Games, for example, used to be huge on the calendar for all athletes who fall within that geopolitical domain. The last Commonwealth Games was 'boycotted' by virtually all the big names from Jamaica. There was no Bolt, no Powell, no Veronica Campbell, and we had to send a virtual 'bramble' team. We didn't hear anybody saying Bolt and Powell weren't committed to Jamaica.

We all accepted, then, that going to the Commonwealth Games was not in their best interest, and yet we will all cheer our hearts out when they decide to participate in the Olympics, an event they believe is worth their while.

How many of us would turn down the offers that we are asking Gayle to turn down in order to claim loyalty to a team, especially one which is perennially losing. We must be honest, even if we can't be fair!