Edna Manley College expects much from 'One Smart Pig' 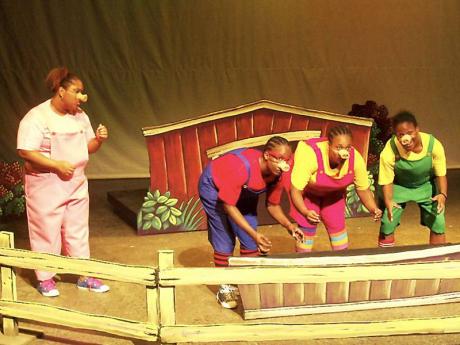 Students from the Edna Manley College of the Visual and Performing Arts during rehearsal for 'One Smart Pig.' - Contributed

The Edna Manley College School of Drama will unveil Matt Buchanan's One Smart Pig, a production for children five to nine years old. The director, Pierre Lemaire, notes that it is the first time that the play is being mounted worldwide and the production team is enthused about this accomplishment.

The play comically retells the story of the popular fable The Three Little Pigs, but zooms in on the intelligence of the 'smart pig' who builds his house with bricks. The story is a source of instructive empowerment for any parent who wants to teach their children about preparedness, timeliness, balance and responsibility. The production's simply written and wit-infused lines will leave the expected mixed audience of parents, guardians, teachers and children doubling over with uncontrollable, contagious laughter.

Lemaire also notes that the production team is highly encouraged to present another 'A-class' production, after being nominated for an Actor Boy award for last year's children's production, Button-Hole Bandit. The team that has contributed to the anticipated success of One Smart Pig includes head of the EMC's music education department, Cecile Strudwich-Green as musical director, and National Dance Theatre Company's and EMC lecturer Kerry-ann Henry as choreographer.

The cast members are the talented Edna Manley College School of Drama students.