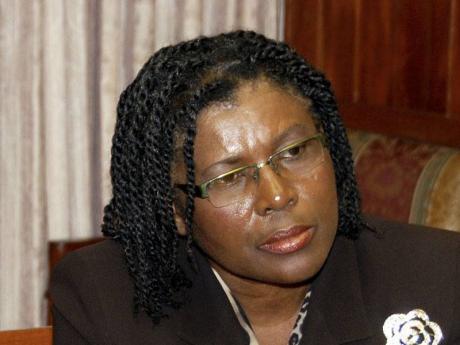 PERMANENT SECRETARY in the Ministry of Transport, Works and Housing, Audrey Sewell, yesterday admitted her office misled the public when it claimed Contractor General Greg Christie's office had "taken" a confidential memorandum during an unannounced visit.

Sewell told The Gleaner yesterday evening that the "confidential" memorandum she sent to portfolio minister Dr Omar Davies was faxed by an officer in her ministry to the Office of the Contractor General (OCG).

Earlier yesterday, a release from the ministry stated that the information "improperly circulated in the press, arises from a memorandum to the Honourable Minister, taken from the permanent secretary's office by the team from the OCG".

This was in reference to the OCG team which made the unannounced visit to the ministry on Wednesday to "sequester" documents related to the Jamaica Emergency Employment Programme (JEEP).

"The OCG is, of course, seriously concerned as to why the ministry's permanent secretary would have stated otherwise," Christie's office said.

Last evening, Sewell stressed that she did not personally fax the memorandum to the OCG.

The permanent secretary told The Gleaner that, in a discussion with an OCG official, she was at pains to point out that the memorandum was private.

"I went on the phone and spoke to the (OCG) officer and told him that I had a concern about that document leaving the office because the minister had not benefited from a review of the document and he said I wasn't to worry, 'It will be managed but we need it for the records'," she said.

Sewell said subsequent objections by her to the release of the memorandum were met with a warning by the OCG official who she said cautioned that the document was being "sequestered".

"On that basis, I told the (ministry) officer to go ahead and send it to them," she said.

However, she noted that the issue for her was not how the contractor general got the memorandum.

"The issue is how it was used."

In the memorandum, dated March 20, Sewell had expressed concern about a lack of information flow to her regarding the JEEP.

The OCG, in publishing the memorandum, argued that it served as evidence that Sewell was not being provided with adequate information on the employment programme which was, at the time, scheduled to be launched in two days.

Standing by other claims

Sometime after speaking with The Gleaner last night, Sewell issued a release to the media acknowledging that the document was given to the OCG. She, however, indicated she was standing by all other claims made in her earlier statement.

In the meantime, Sewell said she would supply the OCG with all the information available to her.

The OCG had indicated yesterday that in light of what it had come to regard as Sewell's "misleading inferences to the media", a formal demand had been made that all outstanding requisitions be fully satisfied by her by 3 p.m. today.