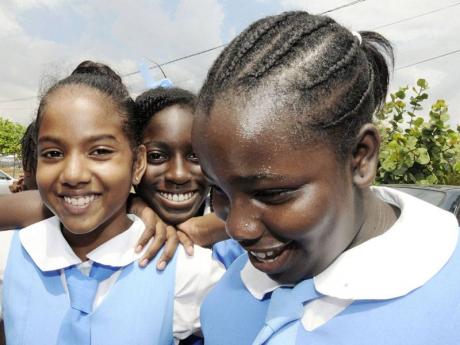 Several students who sat the first day of the Grade Six Achievement Test (GSAT) yesterday declared it "very easy" and expressed confidence they would ace the five subjects and be placed in the schools of their choice.

At Jessie Ripoll Primary, a group of happy children were sitting outside laughing after the exams, all certain that they sailed through yesterday's mathematics and social studies exams.

"Everyone was saying it is the GSAT and it was so hard, but when we got it, it was so easy," stated Hare.

For boys Tyreke Thompson, David Lewis, Tareik Haye, Shervon Reid and Quawayne Howell, they were quite cool but just as sure.

"GSAT wasn't challenging at all, it was so easy. It was just like a regular test," Reid told The Gleaner.

The group was just as excited and shared the same sentiments that the exams were much easier than expected.

"The maths was awesome. All of the questions I knew. I know I will get two 90s," stated Henry.

Chester Francis from Rousseau Primary declared: "I feel I got 90 per cent in both subjects today because it was easy. I feel tomorrow will be harder, but I know I will do good."

Both principal Michael Brown of Jessie Ripoll and principal Carol O'Connor-Clarke of Half-Way Tree Primary had good reports about the first day of the exams, deeming it a tremendous success, and were confident today would be no different.

Today, the 44,000 GSAT students across the island will be sitting the subjects language arts, communication task and science.