JEEP up and running 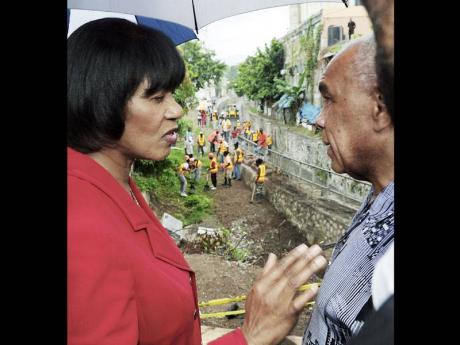 Prime Minister Portia Simpson Miller speaks with Dr Omar Davies, minister of transport, works and housing, as men work in a drain in the Standpipe community in St Andrew, prior to the official launch of the Jamaica Emergency Employment Programme yesterday. - Ricardo Makyn/Staff Photographer

THE SOUND of a horn went off three times as Prime Minister Portia Simpson Miller yesterday announced that the Jamaica Emergency Employment Programme (JEEP) was up and running.

Declaring the programme, which was first promised on a political platform in September 2011, has now been delivered, Simpson Miller invited her audience to step up and take a ride on the JEEP as it was now a national project.

The official launch took place off Barbican Road near the Stand Pipe community in St Andrew.

Simpson Miller said JEEP was not a partisan political initiative but an emergency response to the crisis of unemployment in Jamaica.

"Several persons on the JEEP will have the opportunity to receive training through the HEART Trust National Training Agency. This will allow them to go into bigger things when they leave the JEEP," she said.

JEEP is expected to create short-term employment for some 5,000 Jamaicans.

Dismissing the detractors of JEEP, Simpson Miller said many have attacked the programme since in was first announced.

The Opposition Jamaica Labour Party had said the JEEP was characteristic of the Crash Programme rolled out by the Michael Manley government of the 1970s.

However, the prime minister stressed that partisan politics would not be tolerated in the implementation of the programme.

Describing the first phase of JEEP as a modest but significant start, Simpson Miller pledged that in the new fiscal year her administration would be announcing more initiatives under JEEP.

She echoed a warning to persons who would be employed on the JEEP saying the wearing of party colours would not be countenanced.

Persons who are lining up for employment under JEEP have also been warned that work done would be carefully inspected and monitored by ministry officials. The prime minister said no payment would be made for work not done.

Under the first phase of JEEP, $10 million has been allocated to each of the 63 constituencies for work which will include bushing and the cleaning of gullies.

Simpson Miller said her administration believes the programme must be transparent.