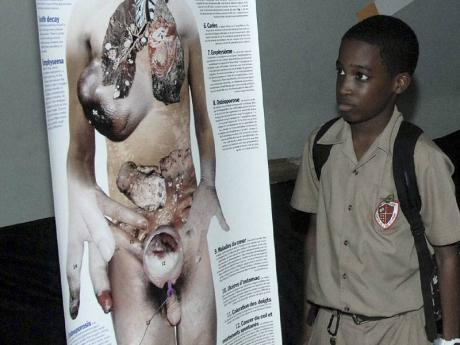 A Campion College student looks at a diagram of a cancer-infested body during the Jamaica Cancer Society's Kick Butts Day at the school on Wednesday. - photo by Ian Allen 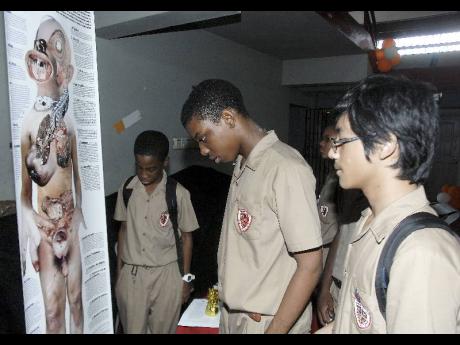 Campion College students looks at a diagram of a cancer-infested body during the Jamaica Cancer Society's Kick Butts Day at the school on Wednesday. - photo by Ian Allen
1
2

THE JAMAICA Cancer Society (JCS) is looking for more schools to take its Kick Butts Day message to the public.

The JCS's Shullian Brown said more information sharing between stakeholders is needed for the movement to succeed.

"They can read and see how informative ... and educational it is and, based on that, then the teachers will buy into the idea that it is learning." she told The Gleaner at the third staging of the day at Campion College on Wednesday."

We have to start again and we hope that the whole idea of Kick Butts Day catches on."

The day was about empowering youth and youth activism and included presentations and displays in the school's auditorium highlighting the dangers of smoking tobacco. She added that other schools were invited to host Kick Butts Day activities, but so far, only Campion had maintained a vibrant interest.

Shanice Neisbeth, a member of the school's Kick Butts Day committee, said people need to realise their lives are diminished by smoking.

"You lose 13 years of your life because of smoking cigarettes. I've read that, by the year 2030, one billion people will die ... as a result of smoking," she said, admitting that she knew persons who died from lung cancer who had never smoked. The committee has 18 members, all in upper-sixth form, and the aim is not to scare the younger ones, but to make them know the dangers.

"For the first formers, because they are so young, they are really surprised at the number of things contained in cigarettes. In fourth form, it's a little harder to convince them ... because they are at that stage where they probably think it's cool. But if you make them understand, especially the guys, that it causes impotence and deforms sperm, it hits them really hard," she said.

Petitions were also signed by students advocating for smoke-free public places, graphic warnings on cigarette packaging and for tobacco control measures. Students were also encouraged to sign pledge cards to not only refrain from smoking, but also to help smokers quit. The pledge cards serve to pressure the Government to enact and enforce integral laws.