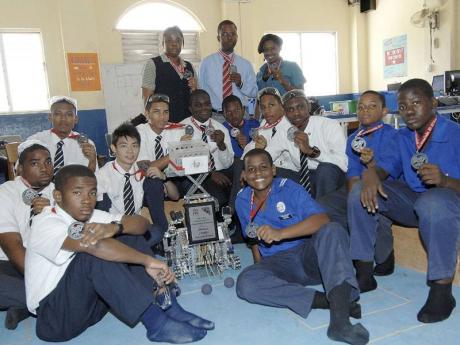 The Jamaica College (JC) robotics team, the Golden Griffins, and their teachers, show off their medals after placing third overall in the FIRST Tech challenge robotics competition in New York last week. JC was the only team from outside the United States of America to enter the competition. - Ian Allen/Photographer

This was the third time JC was entering the competition, held on March 16 and 17 at the Jacob Javits Convention Centre in Manhattan, New York. Last year, the team finished 12th. JC was the only representative from outside the US.

"It definitely feels good because, after putting in all that hard work, you find you have something to show for it," said a beaming Gavin Samuels, captain of the team.

The competition was divided into two divisions of 36 teams each. Two-team alliances work together to score points and win matches. The JC team's alliances won four of the five matches in the initial round, placing eighth. One of the top four teams picked them to be their partner in the semi-final, which they won, propelling them to the division finals. They, however, lost by three points. JC finished second in its division and third in the overall competition. Samuels said the key this year was coordination.

"This year, by far, we definitely worked better as a team. For example, something was left behind and the way the team came together to ensure it reached before the competition was marvellous," he said. Georgia Rudolph, one of the three teachers who accompanied the 12 boys, was proud of the result.

"Working within the time constraints ... the boys have done extremely well," she said. "They went and saw other robots that they thought would beat them, but we got them calm and they just went out there and really made us proud." She noted that the US teams had already gone through two rounds of competition, so they lacked experience. A lack of networking with other teams before the competition is another area she feels they can improve on.

"We have set up a Facebook page and we'll be liaising with other teams for next year," she said. They will also be entering the junior competition, the First Lego League (FLL), next year.

"We saw them make different attachments for their robots, so we need to work on that for FLL. It looked a little easy, so I think we can win," said junior member Sage Michael Brown. JC will also be returning 10 members of the team for next year, increasing the hope that they will go a step further next time. Rudolph said the team will continue working, honing the skills of the younger boys.

"Even though everybody was not involved in the actual making of the competition robot, everyone will get their opportunity to explore." But what about 'Griffin', the robot they used this year? Well, according to Ricardo Anderson, another faculty team member, they have plans for him. There's a WorldSkills Challenge they're thinking about entering plus there's a 'fun project' of marking out the lines on the school's football field.

"We have to keep it (the interest) going for the year so that, when the competition comes around again in January, we'll be ready. We can't go anywhere but up, so the expectations are now very high." He said he expected a "flood of boys" will want to be part of the programme now, based on the feedback they have been receiving.

FIRST (For Inspiration and Recognition of Science and Technology) was founded in 1989 by American inventor Dean Kamen to assist young people in discovering the excitement and rewards of science and technology.