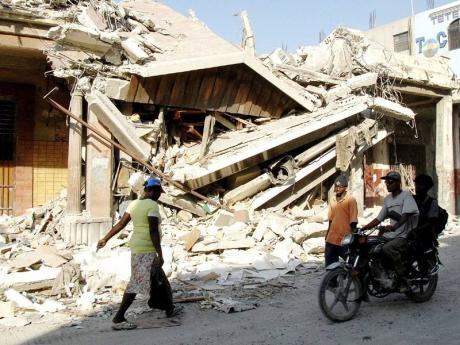 Earthquake damage in Haiti shortly after the 2010 disaster. - Ian Allen/Photographer

The first of a new group of Australian civilian technical specialists dedicated to assist in recovery in developing countries following natural disasters or conflict, and who was dispatched to Haiti in the wake of the 2010 earthquake, completes his one-year assignment at the end of the month.

Jed Abad, a member of Australian Civilian Corps, was deployed by the Australian Agency for International Development (AusAID) to Haiti in April 2011 as the donor liaison officer to the Interim Haiti Recovery Commission (IHRC).

His deployment is one way in which Australia is providing much needed, targeted support to the government and people of the Caribbean nation, according to a statement from the Australian High Commission in Port-of-Spain, Trinidad.

The recovery commission was established in the aftermath of the January 12, 2010 earthquake, which caused widespread destruction, killed more than 250,000 people and injured many more. Over the past year, Abad has played a key role in supporting the work of the central coordinating body for the recovery effort, led by the Government of Haiti and staffed by Haitian and international personnel.

He was instrumental in facilitating funding for key projects for Haiti and its people in the areas of education, health, housing and energy, said the statement.

Following the conclusion of the first mandate of the recovery commission, Abad was requested by the Office of the Prime Minister to transition the donor liaison officer functions to the Haitian government.

The Australian Civilian Corps is a register of civilian specialists experienced in disaster recovery, stabilisation and post-conflict recovery, who are able to be deployed quickly.

Members are chosen for their technical skills and ability to work in challenging environments. "They come from all levels of government and the Australian community and make a tangible difference to people's lives," the statement said.