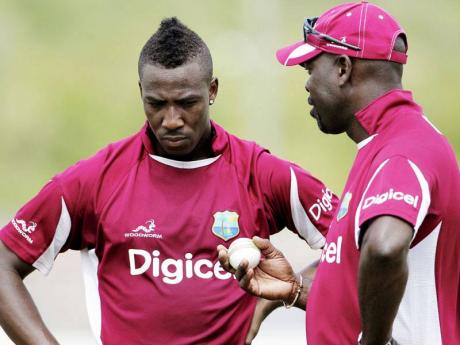 West Indies pacer, Jamaican Andre Russell (left), listens to his coach Ottis Gibson during a practice session in Gros Islet, St Lucia, yesterday. Australia and the West Indies will square off in the fourth of five one-day internationals today with the series tied 1-1. - AP photos 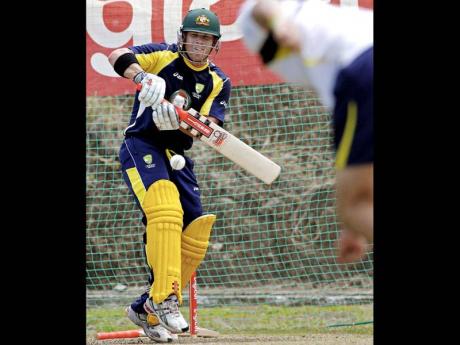 With their five-match one-day international series tantalisingly locked at 1-1 following a pulsating tie in Tuesday's third game, West Indies and Australia will clash again here today, chasing a victory that will hand either side a huge advantage ahead of Sunday's finale.

Both squads were upbeat after practice sessions at the lush Beausejour Cricket Ground on Thursday, remaining focused on a victory that would ensure them the crucial lead in a series that has been an ultra-competitive affair.

West Indies lost the opening match last Friday by 64 runs but hit back well last Sunday to carve out a five-wicket triumph.

Tuesday's third ODI at Arnos Vale produced a tie after the Windies fought back from a near-hopeless position in the game.

They have been strengthened by the inclusion of Trinidadian opener Adrian Barath who has replaced the out-of-form Kieran Powell, a move that selectors expect to pay dividends at the top of the order.

The right-handed Barath, who stroked 114 against Guyana in the Regional First-Class Championship last weekend after recovering from a finger injury, said he was looking forward to the contest.

"It always feels good to represent the West Indies and I am happy to be back," Barath told reporters after a long knock in the outdoor nets at Beausejour.

"The team is on a high and we did well to fight back and earn a tie in the last match, although it was a bit disappointing we did not win it. We definitely have to win both games here to take the series. We will have to plan and execute well."

West Indies will seek to extend their strong showing in the bowling department that has been led by speedster Kemar Roach and exciting off-spinner Sunil Narine.

Roach has bowled with pace and accuracy up front while Narine has been superb in the middle overs and at the death, in slowing the Aussie scoring.

Narine has eight wickets at an average of 10 runs and an economy rate of just under three. Roach, meanwhile, has picked up six wickets at 16 runs apiece.

Having escaped on Tuesday, Australia will feel a sense of reprieve, and aggressive opener David Warner said his team was positive as always and were confident about the challenge ahead of them.

Australia are the top-ranked one-day side in the world but have been erratic, and Warner pointed out they would have to make a quicker adjustment to the Caribbean conditions.

"This wicket seems to be similar to that we have in Australia at the WACA (Perth)," Warner said.

"It's a fantastic venue. We had to adapt to Arnos Vale. It was suitable to the West Indies in a sense but both teams had to play on it.

"We are looking to put down some very good scores and use the conditions well. Right now, I am thoroughly enjoying my cricket."

Beausejour has not been a happy hunting ground for West Indies as they have not won here since they beat Zimbabwe by 10 wickets nearly six years ago.

Head groundsman Kent Crafton described the pitch as "balanced" and "good for batsmen and bowlers", but said whoever won the toss ought to field first.

"I would say (it is) slightly towards the batsmen despite the green sheen that it has," Crafton said.