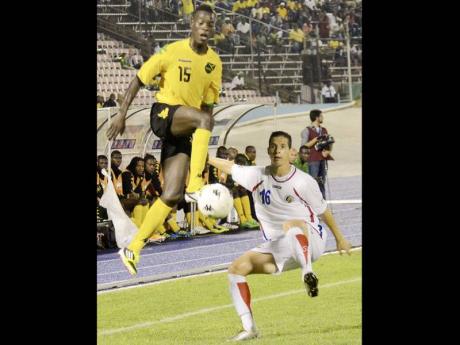 Jamaica's Je-Vaughn Watson (left) goes aerial to control a ball ahead of Costa Rica's Pablo Gabas during the international friendly on Wednesday night at the National Stadium. The game ended 0-0. - Rudolph Brown/photographer

Jamaica's Reggae Boyz battled admirably inside the National Stadium on Wednes-day night to secure a 0-0 draw against Costa Rica in their friendly international, despite playing the better part of an hour without one player.

Captain Jermaine Taylor's 36th-minute ejection was countered with a show of tactical discipline and a few level heads, as the locals withstood the Central Americans with little fuss and could have won the game themselves, with better application in the final third.

While many fans left the stadium in disappointment, assistant coach Alfredo Montesso could not find enough superlatives to describe his team's performance.

"I think the team showed today a very important maturity, because it is not easy to play a game at home being supported by the Jamaicans (who want us to) attack and they (players) did not play with the emotions of the stands, they played with their heads so this was a wonderful maturity that I saw from the team," said a smiling Montesso.

"What I think was the best player today was the group, how they stayed together, how they organised themselves and how they managed to play as a team," he added.

If Jamaica are to qualify for the 2014 FIFA World Cup Finals, the Costa Ricans will most likely form one of the barriers, and after losing six of their eight qualifying matches against 'Loc Ticos', Montesso is happy with what he is now seeing from his charges.

"We didn't lose shape and kept calm, we lost a little bit of our minds in the end of the first half but we got back in the second half and settled down in the game, still one man short. I think we had the two best chances in the game," Monteso assessed.

The first of those chances came before two minutes had passed on referee David Ganter's watch; Navion Boyd forcing a save from goalkeeper Patrick Pemberton, after the Jamaicans capitalised on a defensive lapse inside the box.

The Jamaicans conceded possession to the visitors, particularly after Taylor's ejection, but when they did have the ball, they certainly looked the more likely to score.

Rohan Reid and Je-vaughn Watson were particularly menacing and the latter almost dialled up a goal in the 27th minute, but his grass-cutting pass failed to connect with Dino Williams or Joel Senior, who were both late in arriving in the box.

Not too long afterwards, Taylor, like he has done on too many occasions before, found himself receiving marching orders after pulling down an opponent near the halfway line for his second yellow card.

"We will have to sit down and talk to Jermaine," said Montesso of his skipper's worrisome card tendencies.

Costa Rica should have scored midway the second half but Jairo Arrieta remarkably blazed high over the bar from the edge of the six-yard box.

Substitute Renae Lloyd almost made him pay for that miss when he forced a good save out of Pemberton, after rising to meet a deep corner from Troy Smith, as both teams in the end seemed satisfied with the draw.

Costa Rica's coach Jorge Luis Pinto was disappointed not to make the most of his advantage but was nonetheless happy with the outing.

"We didn't take advantage of the one player more we had on the field, but in the end the result gives us confidence, because we are seeing a very good crop of players in preparation for our World Cup qualifiers," said Pinto.