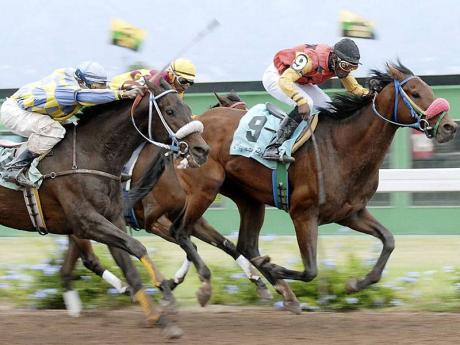 The Pick-9 will embrace races three to 11, the first Super-6 from race one to six, the overlapping Super-6 from six to 11. We look at the second Super-6 which commences with a 3-y-o maiden condition race over 1200 metres to be contested by 14 native-bred fillies.

The race has attracted four newcomers and indications are that the well-forward debutante STAR FLYER will get off the mark immediately at the expense of RE-JOYCE and the speedy SUNSHINE CITY.

To be ridden by champion jockey Dick Cardenas for trainer Anthony 'Baba' Nunes, the bay filly by Dayton Flyer out of Valors Star caught the eye at exercise on Monday morning when galloping 51/2 furlongs in a brisk 1:07.3 by 1.01.1. She looks extremely forward in condition, and having secured a favourable draw at post position 10 gets the nod over SUNSHINE CITY and RE-JOYCE.

The seventh race over 1200 metres for four-year-olds and up (non-winners of 3) has attracted 13 starters, including top contenders QUEEN ADIRA and SAGA BOY, both speedy types.

Although others such as ANNIE OAKLEY, REMEMBER ME and TERRA MARIQUE could also enter the reckoning in a race of this nature, the one I like best is QUEEN ADIRA, who beat all barring WINNIANA over 1100 metres on March 10 when having ANNIE OAKLEY another 41/4 lengths behind in third.

That being her first outing in four months, QUEEN ADIRA (working well) will report much sharper, and with Paul 'Country' Francis replacing the now sparingly used Leo Miller, the War Marshall-Lady Bangalore offspring should go one better.

A maximum field of 16 maiden three-year-olds is slated for the eighth race over 1200 metres, and here it should come down to a straight fight between the well-forward debutante YASSIN and the more experienced EIGHTEEN KARAT.

Leading all-time jockey Winston Griffiths is down to ride the Patrick Lynch-trained YASSIN, a chestnut filly by War Marshall out of Restless Belle, who looked the part at exercise on March 14 when breezing three furlongs in 35.1. She will more than likely start favourite by virtue of exercise reports, but my preference is for the Wayne DaCosta-trained EIGHTEEN KARAT under leading jockey Dane Nelson, having finished a close third to FLY FOR PLEASURE (closing) over 1100 metres on February 18.

The ninth, to be contested by 14 native and imported three-year-olds over 1100 metres, has a difficult look about it, with no fewer than five having good claims. They include SUNLIGHT EXPRESS, DOUBLE BUTTON, DIFFERENTGENERATION and HOWGREATTHOUARE with Griffiths riding for Philip Feanny.

An American 3-y-o colt, HOWGREATTHOUARE has shown promise in two starts, and having worked well since chasing home PRINCESS NIYAH recently should go one better.

The 2010 Triple Crown winner and Horse of the Year MARK MY WORD (Walker up) has looked too impressive at exercise to lose the 10th race for the Eros Trophy over 1400 metres, despite the presence of the American horse RAISE A RUCKUS (working well) who is pretty light in a seven-horse field.

Then, take MONEYNEVERSLEEP (Dane Nelson up) to win the closing maiden race over 1500 metres at the expense of CLASSICAL PLEASURE and FRISSON.