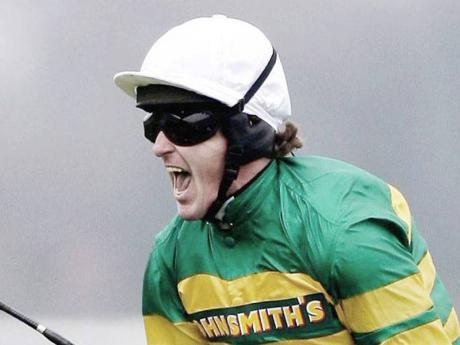 Today's racing takes place at Newbury, Lingfield, Sedgefield and Wolverhampton in the evening.

There is also simulcast racing from Aqueduct in New York.

Trained by ex-jockey Jonjo O'Neill for top owner JP McNanus, SYNCHRONISED (8-1) provided 16-time champion jockey McCoy with his second Gold Cup success, following MR MULLIGAN in 1997, and O'Neill with his first Gold Cup win as trainer, having ridden the winner of the race twice in the 1980s.

Highly fancied KAUTO STAR, who was trying to win the race for a third time with Ruby Walsh up, was pulled up with more than a circuit to run.

Never far off the pace in fifth with two fences to go, SYNCHRONISED moved into contention at the final fence before powering up the famous Cheltenhan hill to win by 21/2 lengths from 50-1 outsider THE GIANT BOLSTER, with last year's winner and 7-4 favourite LONG RUN finishing third. Fifteen ran.

The festival showpiece was watched by a sell-out crown of over 70,000.

At Newbury in the 10th race (three-mile hurdle), we like the look of the Nicky Henderson-trained SEVEN WOODS (3-1) to be ridden by stable jockey Barry Geraghty up in a field of 13.