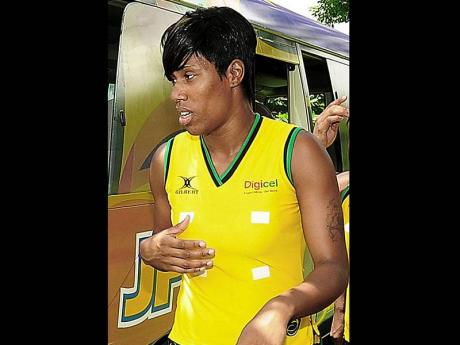 After more than nine months out because of a knee surgery, national representative Kasey Evering is set to make a return to competitive action for Tivoli Gardens in the Jamaica Netball Association/Berger Paints Super League on Saturday at the Leila Robinson Courts.

The 30-year-old Evering, who underwent surgery in New Zealand last June to repair her injured left knee, told The Gleaner she is very eager to get her netball career back on track.

"I am really excited and I can't wait to start playing competitively again," said Evering. "I think this is the perfect league for me to start out with because it is much different from playing in the ANZ Championships, so I am really looking forward to it," she said.

The tall defender reaggravated a knee injury while representing Canterbury Tactix in the ANZ Championships, played in Australia and New Zealand, during a collision with former national teammate Carla Borrego, who plays for the Adelaide Thunderbirds, on April 3 last year.

Evering last represented Tivoli in 2010 when they won the Berger Paints Super League title. She said she would be taking the competition seriously, as she plans to use it as part of her rehab to get herself back into shape for the ANZ Championships next year.

"I really would like to get another contract in the ANZ Championships so I am going to be using the Berger Paints League to prepare myself mentally and physically and continue to strengthen my knees and to see what I need work on before I go overseas," Evering said.

The lanky player last represented Jamaica in January last year against the defending world champions, Australia, added she is looking forward to representing the Sunshine Girls in the Caribbean Netball Championships, which will be held in July.

"I have been training with the national senior team and this has been going great, and so I plan to represent the team in the Caribbean Championships in July," Evering stated.