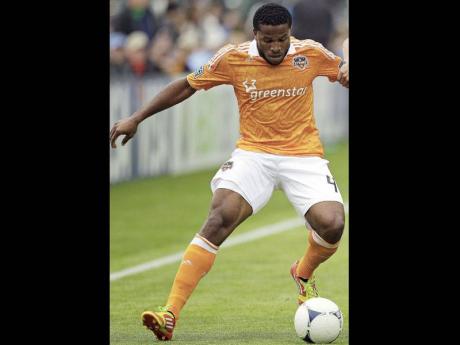 Two Jamaicans who were part of the Reggae Boyz's 0-0 draw with Costa Rica on Wednesday are expected back in the United States for their club's next Major League Soccer (MLS) fixture tonight.

Je-Vaughn Watson and Jermaine Taylor should be available for Houston Dynamo, unbeaten in their first two MLS games of 2012, against host Seattle Sounders.

Taylor and Watson started last Saturday's 1-0 win over San José Earthquakes, and for Jamaica in the midweek friendly international, when Taylor was sent off in the first half and Watson was substituted midway the second.

It is unclear what roles they will have against Seattle, especially when fitness and travelling are factored in. Midfielder Watson has played two full games for Houston, tied for first on points in MLS's Eastern Conference. Taylor's first action was 90 minutes last weekend at left back for injured Corey Ashe, who is expected back tonight.

No such confirmation yet for Seattle's O'Brian White. The St Ann native was not part of Seattle's opening game 3-1 win over Toronto FC (TFC) Saturday. However, national striker Ryan Johnson continued his impressive form in TFC's opener with a superb goal. Tomorrow, Johnson hosts San José and fellow Reggae Boy Khari Stephenson, who made his first start of 2012 against Houston.

The Earthquakes have one win and a loss for eighth place in MLS's Western Conference. Chivas USA, winless in two games, trail them, prompting speculation about Jamaica-born head coach Robin Fraser. Fraser was hired last season. Chivas have a losing record which, he acknowledged, endangers his job.

"At the end of the day, this game is about results," Fraser said during pre-season.

Chivas travel to Real Salt Lake (RSL) tomorrow after losing 1-0 Saturday to Vancouver Whitecaps, which found no playing time for Jamaican rookie, Darren Mattocks. After two wins, Vancouver are tied on points atop the Western Conference with RSL and Colorado Rapids.

Reggae Boy Shavar Thomas is also on Montreal's roster, but is yet to see any MLS action. Columbus are seeking their first points after an opening-game loss. On Sunday, midfielder Dane Richards and his winless New York Red Bulls host the Rapids with national teammates Omar Cummings and Tyrone Marshall. Richards played the full game in last weekend's 2-0 loss to RSL. Cummings lasted 83 minutes in a 2-1 victory over Philadelphia Union, but the striker's cross led to the Rapids' first goal.