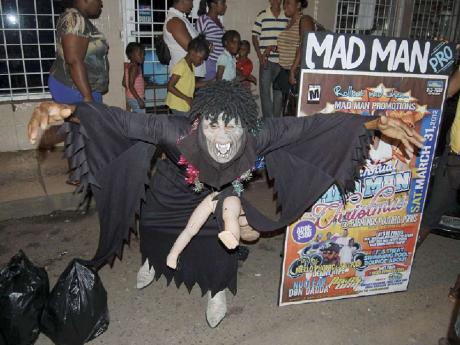 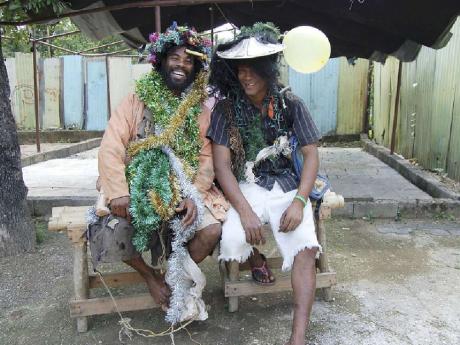 Eugene Whiles (left), promoter of Mad Man Christmas, and Shawn 'Yellow Man' Allen relaxing at their base in Porus, Manchester. 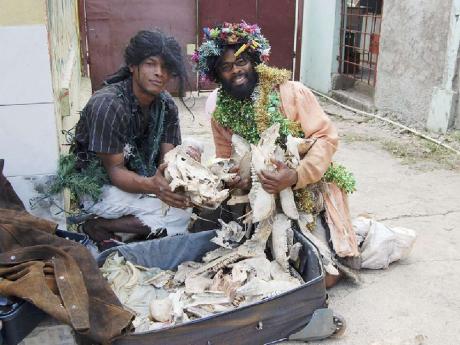 WHAT STARTED out as one man's thoughts, first looked on as being simple madness, has now become a phenomenon in the town of Porus. The hilarious event - Mad Man Christmas - is held annually on March 31 in Porus, Manchester.

The event is organised by Eugene Whiles, more popularly known as Mad Man, who hails from Red Berry district, a community approximately 10 minutes drive from the town of Porus.

"I am really just a man who just live my life, don't business what people want to say. So I will just walk around barefoot. I am a farmer, so sometimes I walk around in dirty clothes, things like those, so people call me Mad Man," Whiles said.

He added: "One day, I said to myself that you know I am going to keep a dance and call it Mad Man dance, and I kept it in my community. To my surprise, many people came to the dance dressed up looking mad. It was a big talk after, so I decided to keep it again and tell people to dress like them mad and call it Mad Man Christmas, because to have a Christmas in March really mad fi true," he said with a very serious look on his face.

The rest is history as Mad Man Christmas has become one of the most-talked-about events in Manchester and neighbouring parishes.

A typical event itself is a bellyful of fun. For example, the annual gate prize is 'one dozen common fowl'.

"It's just fun for everyone. People know that when they come, they are going to forget all their problems and have a good laugh," Whiles said. "For instance, I have a donkey, which I carry to the dance, that I dress up like a car with licence plate, steering, and muffler. Last year, I was going to ride in the dance on a pig that I dress up, but I had transportation problem.

"People dress crazy. You may see a young man in his 20s and think that he is 100 years old, how he's dressed, or a big man dressed like baby being pushed in a pram."

The way in which Whiles and his team promote the event is also comical. Recently, the town of Porus was blocked with people as Whiles and friends set up a float on a flatbed truck with people dressed up in 'mad fashion' with the 'common fowls in tow'.

"Sometimes my friends and I just dress up mad and go out in the town whether Porus, Mandeville, or May Pen, carry two common fowl and cook wi pot and drink and wi nice. A suh wi advertise the dance," Whiles explained.