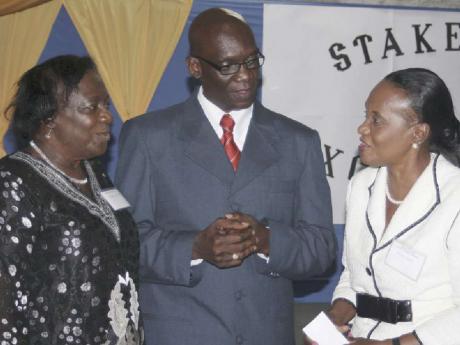 Member of Parliament Denise Daley has the keen attention of Dr O'Neil Ankle, principal of Jonathan Grant High School, and Daphne Clayton, chairman of the school board, at the cocktail reception. 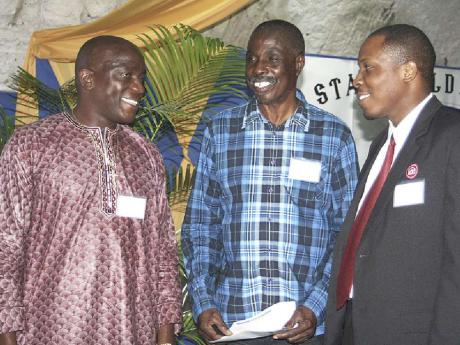 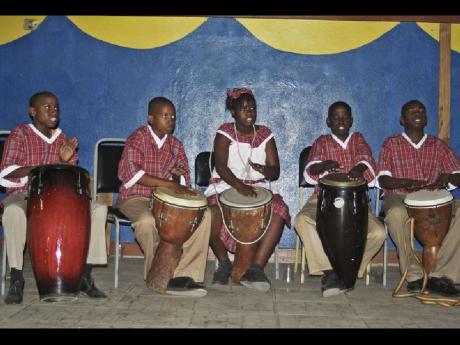 THE SCENE at Jonathan Grant High School's dome on March 8 reflected one of fellowship and togetherness.

In fact, the usually dreary, uninviting dome was transformed into a professional and relaxing social environment with food and entertainment.

The cocktail reception dubbed 'Stakeholders Care - Excellence Is in the Air', the brainchild of newly appointed principal Dr O'Neil Ankle, was held to forge stronger alliances between the educational institution and the business community.

While recognising retired principal Cortis Nolan for her sterling service spanning 1999-2011, Daphne Clayton, chairman of the school board, expressed optimism with the appointment of her passionate successor.

"There is no doubt that his contribution to nation building will continue to expand Jonathan Grant High School. Already, we have recognised his enthusiasm and the dedication that he brings to the job," Clayton told the gathering.

Ankle, appointed on January 9 this year, outlined a five-year development plan, which includes construction of more classrooms and an auditorium, in addition to improvement to the science labs.

"We want to begin to put the students in classrooms where they can feel comfortable. Some of the classrooms that we have here are not comfortable," he said.

A former athlete and scholarship recipient, he highlighted the importance of sports at the Spanish Town-based institution as key towards its educational development and eventual success.

The 2007 LASCO Principal of the Year told The Gleaner that with the necessary support from the business community, Jonathan Grant High would become a force to be reckoned with in the near future.

"The school can become the beacon in Spanish Town, and that's where I want to take this school. In five years' time, I want to make this school into the kind of school that persons envy what is happening here. Government doesn't have the kind of funds that are required to make schools into cutting-edge institutions, so I'm relying on the business community," Ankle noted.

"I've always said that a school cannot survive on its own; you have to have partnerships. Today is a testimony that Jonathan Grant is growing from strength to strength. When I look at all the stakeholders and the categories in terms of who are here, it augurs well, not only for the school, but for the entire community," Daley stated.

"I like the new principal's enthusiasm, and I totally agree with him. We are supposed to invest in our students and help them to be better persons when they leave school," said Forrester.

Marsden Dennis, president of the past students' association and branch supervisor at the Victoria Mutual Building Society's Spanish Town branch, said that he was re-energised by the dynamism of Ankle, who has represented Region Six with distinction and has been an inspiration to other institutions.

"It gives the school, the administration, and staff a reason to come together and support the institution as Jonathan Grant High takes its place among the ranks of other traditional schools. I am rejuvenated and charged up in terms of working hard to get the past students to come in and support because the school really needs that," Marsden told The Gleaner.

The shift-operated institution, built in the 1970s, was named in honour of Jonathan Grant, the minister of labour in 1957, in recognition of his invaluable service to Spanish Town.

The institution was opened on October 6, 1980, as a secondary school under the guidance of its first principal, Courtney Brown, and was upgraded to a high school in 1988.