A man of many seeds 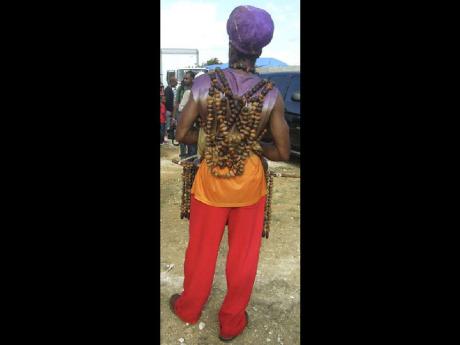 Sharn Robinson of Lincoln, Manchester, shows The Gleaner his 'vest' made of native seeds earlier this year. 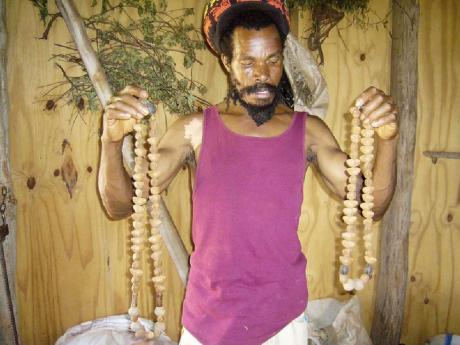 Sharn Robinson still has the first two seed necklaces he made in 2004. 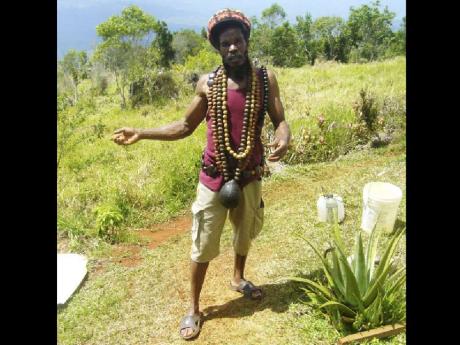 A huge coconut pendant is typical of many of Sharn Robinson's seed necklaces. 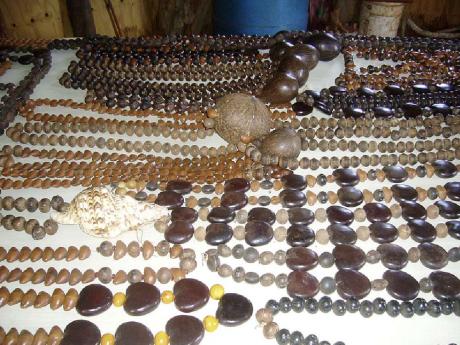 There is not enough space on Sharn Robinson's bed to display his personal collection of seed necklaces. - Photos by Paul Williams
1
2
3
4

WHEN I saw Sharn Robinson at Accompong Town, St Elizabeth, in January, I stopped and looked. This Rastaman had a majestic bearing, and had seeds of various shapes and sizes, those which he was obviously selling as necklaces, and those which he wore on his back in a most unusual way, causing onlookers to stare. Also, the waist-long necklaces strung down his torso had huge, shiny coconut pendants.

After a brief chat, I realised Robinson was no ordinary seller of native seed necklaces. So, on Sunday, March 11, I journeyed to the cool and tranquil district of Lincoln, Manchester, to find out what was up with these huge seed necklaces, and the inspiration behind gathering the seeds. And if I thought I had seen many seeds in Accompong Town, I was wrong. There were several bags of them in Robinson's humble abode, located on a red-dirt incline.

Originally from Harmony Hall, St Elizabeth, Robinson went to visit a cousin in Lincoln in the late 1990s and fell in love with the picturesque and fruitful place. He decided to relocate, but settling down wasn't easy. He had been "been through good and bad times" he said.

One of the bad things was the destruction of his farm by an associate. That didn't deter him as he embarked upon another project. But, just when things were beginning to look prosperous, there was another intervention, this time from outside sources. And his investment went up in smoke, literally. "Sometimes you win and sometimes you lose, sometimes yuh even lose yuh own life," Robinson philosophised as we walked around his yard.

It was in this same yard that he built a fire when he was overwhelmed by challenges. That was in 2004. He sat down, looked into the fire, "build a meditation", and called upon his ancestors, including his mother and father, Pearl and Felix, to assist him. "Mi bawl out and say 'Help!', until mi voice enter the earth, and mi a listen. Den mi heard a voice say, 'Go look seed,' and a just right deh so it start," he told The Gleaner. "Whatever you want, ask the ancestors by calling their name."

As luck would have it, some of the seeds were right there in Lincoln. Lucky seeds. And on Sunday, the trees, in their abundance, were in full bloom.

Shortly after the 'epiphany', Robinson began to notice that people were actually wearing native seeds, but only a few were on their necklaces. He said when he once saw Mutabaruka in a long 'horse eye' necklace, he became even more inspired and decided to make longer necklaces with more seeds. He now goes over the country collecting a variety of seeds, and selling his huge necklaces of macaw fat, abe, yellow nickal, lucky, cacoon, cashew, and horse eyes seeds.

One of the challenges Robinson faces is the refusal of some people to appreciate the native seed necklaces. Instead, they prefer to adorn themselves with cheap, imported costume jewellery. People who wear his native types, he said, are special, and he will make them in "any style, any pattern" to order. It's not just about the ones already strung up. He wants a regular market as he mainly sells his creations at events such as festivals and fairs.