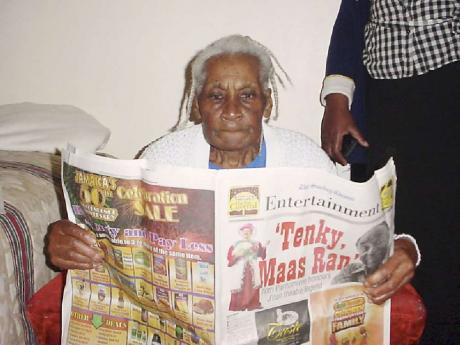 Ada Robinson reads a copy of The Gleaner.

AT 94, Ada Robinson of Nine Miles in Spaldings, Clarendon, still takes pleasure in reading her Bible and the newspaper.

Robinson, who still has all her faculties intact, is an ardent listener of talk shows. She told The Gleaner that her favourite was 'Perkins Online' on Power 106FM.

Still possessing a sharp pair of ears, Robinson, who is a Christian, is known for correcting persons who make mistakes with verses of scripture.

She told The Gleaner that her ability to read and write well is because of her late favourite teacher, Adolphus Wright, who was headmaster of Baillieston Elementary School near Spaldings, Clarendon. She said Wright always took pride in his students' ability to read fluently.

Born to Isabella Boothe and Joe Brown at Cuffie Ridge in St Ann, Robinson, who will be celebrating her birthday on May 18, was born in 1918. She pointed out that her longevity has much to do with the goodness of God.

Robinson, who is in very good health, said while she was growing up, she was a regular at church services; and this she continued up until six years ago when she stopped going to church because of weak legs.

Known for her independence, she noted that in an effort to provide for her five children, which her union with her late husband Bertie Robinson produced, she was an active vendor at markets in Spanish Town, Spaldings, and Mandeville.

"I liked the idea of selling in the markets because I was able to raise money to care for my five children and my husband, Bertie, who died 54 years ago," said the widow.

Trust in the 'way maker'

In-between questions from The Gleaner team, Robinson did not stop reciting Bible verses and insisted that every person should take time out to serve the Lord because he is a "way maker".

Robinson made it clear that while she was growing up, and especially when she was a young mother, she used to feast on corn dumplings, corned pork, and cow head and foot. However, according to family members, she now eats mostly crackers and other light stuff and drinks plenty of tea.

Robinson, like many senior Jamaicans, believes that Jamaica has seen better days as people used to be more loving. Her hope is for a more peaceful society.

The nonagenarian said she misses her favourite talk show host, Wilmot 'Motty' Perkins, who passed away recently. She described him as a very informative and intelligent man from whose advice many benefited.