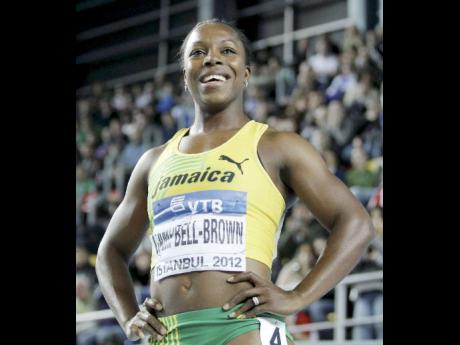 I bet you did not know that Jamaica's sprint queen, Veronica Campbell-Brown (VCB), is an avid tennis fan and is also looking to, in the "distant future", make strides in family life.

She works out to Byron Cage, is hoping to visit Africa soon, has not dismissed a possible coaching career after her competing days have ended, and is a lover of gospel and inspirational music.

The two-time Olympic champion gave her fans a rare peek into her life outside of track and field, as she fielded questions from all over the world through popular social media outlet Twitter on Thursday.

Dubbed '#VCBThursday', fans of the two-time IAAF World Championships gold medallist got the opportunity to engage the star athlete on a range of topics ranging from professional ambitions to more personal topics, such as whether or not she intends to have children in the future and how she views her rivals.

"I like tennis ... . I play tennis on occasions with my husband, I am an amateur," Campbell-Brown tweeted in response to a question concerning her sport of preference besides track and field.

"Any children in the near future?" one fan asked. "Distant future," she replied.

Campbell-Brown, one of the sport's most recognisable and celebrated faces internationally, also responded to questions relating to this summer's Olympic Games; her intentions and goals as it relates to the July 27-August 12 spectacle, also citing that no decision has been made so far on when and where she will make her first outdoor appearance.

"All the very best in#London2012. I hope u get that gold & do what no other athlete has done," one fan tweeted.

"That's thoughtful of you. Thanks. I will see what destiny has in store for me," Campbell-Brown responded, before touching on her outdoor calendar.

"(Outdoor season opener is) to be determined, (I am) still shaking off indoors," said Campbell-Brown, who earlier this month successfully defended her 60m title at the IAAF World Indoor Championships in Istanbul, Turkey.

Campbell-Brown described her experience at the 2008 Olympic Games in Beijing, where she retained her 200m title, as a "special" one before responding to questions on her preference between a 100m and 200m title in London later this year.

"I have to make the Jamaican national team before I can even think of that, however, that is an interesting question," said Campbell-Brown.

As it relates to her rivals and whom she considers her biggest source of inspiration, Campbell-Brown shared that she respects all of her rivals and that they all inspire her whenever they meet at the starting blocks.

Campbell-Brown is expected to be one of the main figures at the Jamaica Athletics Administrative Association/Supreme Ventures National Senior Championships and the Olympic Games in London.