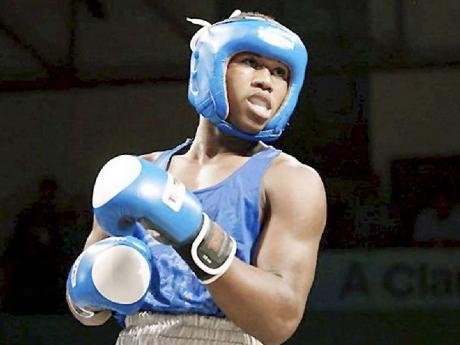 Wray and Nephew Contender excitement reached fever pitch last Wednesday night, when 42-year-old Derrick Spencer, one of the veterans in the 16-week made for television boxing series, and his 25-year-old rival Ramel Lewis, gave spectators a lot to cheer about in a thrill-packed six-round encounter.

At the end of the fight, Lewis walked away with a unanimous decision, but the consensus afterwards was, "It is a pity that one of them had to lose." Lewis was awarded the verdict 58-55 by judges Luke Irons and Clifford Brown and 58-56 by judge Keith Brown.

The series, which is being promoted by MJK Productions, and is sponsored by J. Wray and Nephew, Foska Oats and TVJ, with approval from the Jamaica Boxing Board of Control, reached a new high, and the Chinese Benevolent Association auditorium buzzed with excitement for the entire six rounds. Spectators were on their feet for the duration of the fight, cheering wildly, as both men threw caution to the winds and engaged in a memorable slugfest.

Spencer, who represented the Green Team, provided the first piece of excitement when, after his team had won the pre-fight challenge and earned himself the right to choose his opponent, selected the dangerous Lewis, one of the stars of the Yellow Team. He said afterwards that he was confident that he could win and wanted to fight the best. He did not win, but he earned the respect of his opponent, spectators and viewers with one of the most courageous performances of the tournament.

Lewis, who is known as a brawler, came out aggressively from the opening bell, but Spencer fought back behind a pinpointed left jab and won the first round. Lewis continued to attack his opponent in the second round and won this round because he was able to land more effective punches to the body and head. Spencer kept himself in the picture, however, with some excellent counterpunching.

The third round was particularly explosive, as Lewis, who was obviously trying for a knockout, went after Spencer with a two-fisted attack. Spencer did well to weather the attack because he was hurt a couple of times and took an eight count from referee Ransford Burton after being left helpless on the ropes by a Lewis attack.

To the consternation of all, including Lewis, he did not back off, and fought back near the end of the round. This was the pattern for the remainder of the fight. First it was Lewis who had the upper hand, then the tide would change abruptly and Spencer would take over. The momentum changed repeatedly and spectators were kept on their feet cheering wildly.

Miraculously, the fight went the distance, and at the end, Lewis had the satisfaction of being awarded a hard-fought victory. Spencer was given a rousing cheer by spectators for his excellent performance, and the consensus afterwards was that this was the best fight so far in the series, which is now near the halfway mark.

In the two amateur bouts, Chevon Bartley from the G.C. Foster gym defeated Anthony Clarke from Bruising gym in a welterweight contest and in the other, Michael Gardener from Bruising gym had to work hard to gain a majority decision over Germaine Bowen from the Hard Knocks gym.