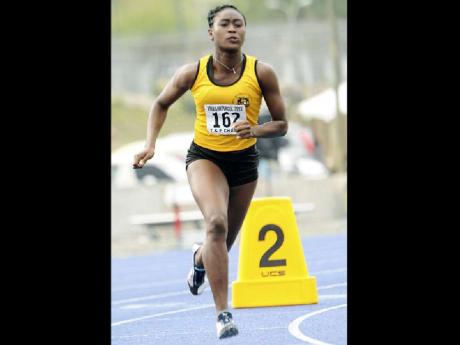 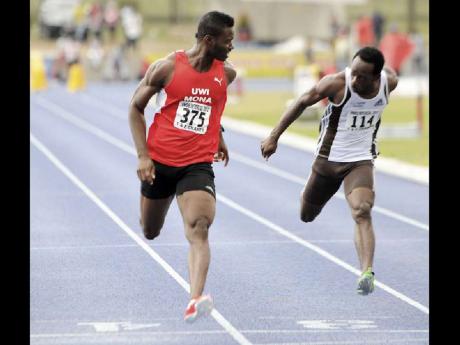 Jason Young (left) of the University of the West Indies winning the men's 100 metres final in 10.29 seconds at the Intercollegiate Track and Field Championships at the UWI Usain Bolt Track yesterday. Jermaine Hamilton (right) of G.C. Foster College was third in 10.42.
1
2

Clayton, who was third in the event at last year's GraceKennedy/ISSA Boys and Girls' Championships, was very proud of her achievement.

At press time yesterday, UWI led the way in the men's section with 74 points, six ahead of University of Technology (UTech). G.C. Foster were third on 60 and Mico fourth on 15. Defending champions G.C. Foster College, with 85 points, have a healthy lead among the females. They are followed by UTech on 51, Mico 37, and UWI 27.

There were no surprises in the 100m finals. Jason Young of UWI and UTech's Carrie Russell both delivered with impressive wins.

Young showed his class in the latter stage of his event to pull off a good win in 10.29 seconds as UTech's Ramone Nichol clipped G.C. Foster's Jermaine Hamilton for second. Both were awarded the same time, 10.42.

The meet ends today with competition set to get under way at 12:30 p.m. with the heats of the women's 200 metres. Twenty-one finals are down to be contested today, with a new feature being the cheerleading competition at 3 p.m.