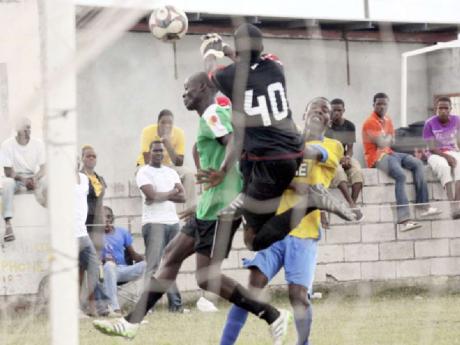 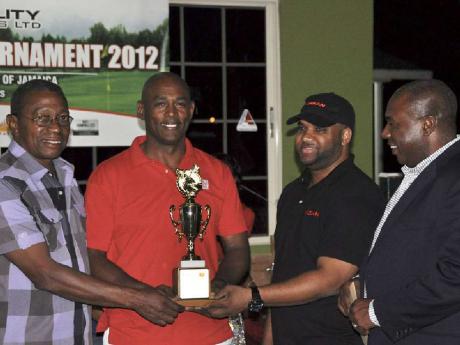 Tony White emerged as the overall winner of the 19th annual Vic Higgs Golf Tournament, a memorial hosted by the Heart Foundation of Jamaica in association with Fidelity Motors and Just Bet, which was held on Monday.

The event included a 'putting competition', which was won by Mike Bradford.

The tournament was supported by 104 golfers, some of whom had not been playing the sport for a while, but had come specially to support the fund-raising efforts of the foundation.

All proceeds of the tournament will go towards the mobile screening programme, which travels islandwide providing screening tests for the risk factors of heart disease.

Even with having secured a semi-final spot five games out, Rivoli United continue to show no let-up in their hunt for the South Central Confederation Super League.

Their lead has widened to 10 points overall, and 12 more than the nearest contender in Zone A. To demonstrate their dominance, Rivoli journeyed to Monymusk in Clarendon last weekend and won 2-0, two goals coming in the five minutes leading up to half-time from the boots of Jeremy Wilson and their experienced striker Fidel Anderson.

The battle for the second semi-final spot from Zone A is likely to go down to the final game in the round. Royal Lakes (19) and Bodles (18) lead the fight. However, New Green on 15 points still have a great chance, especially as they may hold the edge when the competition committee meets to decide the outcome of their aborted game against De La Vega. The game ended shortly after New Green had equalised in the 65th minute. A bottle was thrown, hurting the assistant referee.

The two spots are still up for grabs in Zone B. However, last year's beaten finalists, Meadows, are firm favourites at this stage. With four matches to complete the preliminary round, 21 points provide them with breathing space against Spartan and Naggo Head on 15, and Super Action and Downs on 13 each.

In key results from last week, Super Action improved their chances of surviving the drop when they won 3-1 against Naggo Head at STETHS, while former Sporting Central Academy coach Vassell 'Tutu' Reynolds began his stint with Spartan on a winning note - defeating Downs 3-2.

Porus made the biggest move, leaping to second place for the first time this season following last week's round of The Captain's Bakery & Grill-sponsored Manchester Major League.

Porus won 3-0 against Cobbla Gully Strikers at Kirkvine to go to 21 points, but they were assisted to second place after mid-season champions Kendal dropped points for the second consecutive week. Two weeks ago, they were beaten 2-0 by Comfort and last weekend they were held to a 1-1 draw by newcomers Villa United. Kendal's 19 points are good enough for third place, six ahead of fourth-place Comfort.

A new season of the Manchester Under 17 competition will kick-off today at Kirkvine. Four games are scheduled.

Twenty two teams, inclusive of schools, are slated to take part. As usual, the official kick-off will be preceded by a dress parade of all the teams at 11 a.m. Sponsor again will be Power Services Company Limited, which also sponsors the parish's Division Two league.

There is just one change to the leadership of the respective zones of the Power Services Manchester Division Two following action earlier this week.

Plouden still lead Group B with six points, but Greenvale have taken over the leadership of Zone B on goal difference, following a 2-0 win over Hanbury. Greenvale have four points, Mandeville United have just a point, while Hanbury are yet to score.

The early going is close in Zone C where after two of the four games to be played, Flava have four points, followed by Hasty Good (three), Mike Town (two) and Allied Youth (One).

Zone D is still led by Cedar Grove on four points, but there is now a slight change with Three Chains and Land Settlement now locked for second place on three points. Two teams from each zone will advance to the knockout round.

The latest round brought their tally of three games to a whopping 16 goals. They are now sole, overall leaders with 10 points from four games.

Last weekend, they shared the lead with Real Santa. However, Real Santa were surprised 2-3 by Longwood, a team that suffered a 4-0 loss at the hands of Treasure Beach.

In other games this week, Holland defeated Steppers 1-0, Middlesex edged Northampton 1-0, Haughton outscored Rocky Hill 3-1, while Round Hill and New Holland battled to a 0-0 draw.

Next Tuesday: Round Hill vs Middlesex at Treasure Beach; Rocky Hill vs New Holland at Lacovia.

Wednesday: Northampton vs Haughton at Lyco; Steppers vs Treasure Beach at Black River.

Thursday: Longwood vs Holland at Lyco; Prospects vs Real Santa at White Hall.

Taking advantage of an early 11th-round schedule, New Bowens defeated Milk River 1-0 on Tuesday to move to 25 points. It was their second-straight win after losing the mid-season final to Jamalco.

Jamalco, on the other hand, have dropped points for the second week after mining draws against Woodhall and Longwood.

Last week they led New Bowens by a point, but this week the positions are reversed. It is the second time New Bowens have held the lead. They held the lead approaching the eighth round in the preliminary stage, but lost it after they were disgraced 4-0 by Jamalco in their marquee clash.

In other results this week, Four Paths held on to third place with a 2-0 win over York Town, while Gimme-me-bit failed to show for their game against Original Hazard.

Black River were stalled in their march towards an early semi-final spot in the Wray & Nephew-sponsored St Elizabeth Major League football competition, when they were held to a 1-1 draw by Parottee last weekend.

However, their lead was increased by a point and they now have eight, as second-place Appleton were ducked points by the competition's committee. Appleton outclassed previous third-place team Newell 4-1, but instead of a rise in the standings, the committee ruled they had used an ineligible player in their first-round fixture against Braes River. They had beaten Braes River 2-0.

The reversal has resuscitated Braes River's chances of avoiding relegation as they are now sixth.

As if their lead in the senior South Central Confed Super League football competition is not enough, Rivoli showed their depth in the Under-20 version last weekend with a resounding 7-0 win over Monymusk.

Also scoring opening wins were New Green, Meadows and Downs. New Green won 2-1 over De La Vega and despite their seniors' match ending in a 0-0 draw, Meadows had a 3-1 win over Newlands in the Under-20 fixture. Downs lost the senior fixture 3-2, but won the Under-20 match-up against Spartan 2-1. The Under-20 game between Super Action and Naggo Head was not played.

Under-20 games today: Rivoli vs New Green; Spartan vs Super Action; and Meadows vs Naggo Head.

Favourites Fort International continue to lead the Impulse-sponsored Portmore/St Catherine Domino League after 16 rounds of action. Fort easily disposed of Spring Village 300-223 in an away game at Spring Village last Sunday to lead the standings with 56 points. The leaders' nearest rivals, Ackee Pod (52), defeated Passagefort United 300-281 to stay four points adrift, as the race for the top team in the preliminary round heats up.

East Portmore Portals' forward Keino Walker struck a double on Sunday to lead his team to a come-from-behind 3-1 win over Braeton United and into the semi-finals of the LIME Portmore Division Two Football League.

Portals received an early blow as they were reduced to 10 men when Nicholas McKinley was shown the red card in the 13th minute. Michael Rodney scored moments later to give Braeton the lead. However, Portals striker Walker brought his team level in the 39th minute from the penalty spot. Walker won the penalty after he was cut down in the box by Braeton's Dennis Golding. Walker and Shamir Rall also netted in the second half to hand them the vital points.

Portals have 22 points - the same as Westport - but a superior goal difference places them third in the preliminary round. Westchester booted Daytona from the competition with a 2-0 win in the opening game at the venue, as Dane Thomas netted twice.

Westchester top the preliminaries with 29 points. Meanwhile, Hellshire United wrapped up second place with 24 points after they defeated Westport 3-1 at Passagefort playing field. Rohan Cato scored a double, while Rohan Grant netted the other goal. The semi-final is scheduled for Sunday, April 1.

Hellshire United and East Portmore Portals will meet tomorrow in one of two semi-final games inthe Colin Fagan-sponsored Portmore Division Two Knockout football competition at the Ferdie Neita Park in Braeton, Portmore. The first semi-final, will commence at 1 p.m., while in the second game at 3 p.m. Westport play Garveymeade.

The first game should be competitive as Portals will try and defeat Hellshire for the first time this season. In the preliminary action, Hellshire had 1-0 win over Portals in the first round and the second meeting between the teams ended 0-0. The second game should be one-sided as Westport are expected to win easily over Garveymeade, which only got a point in the second round of the league, as they lost six of seven games.

Zone One team Miracle Open Bible (MOB) are overwhelming favourites to win their final preliminary-round game of the Power of Faith Ministries 20\20 Church cricket league against The Seniors (an over-40 team), at Bridgeport sports ground this morning at 10:30.

A win for MOB will see them locked on points with second-place Power of Faith International (12 points) and already- qualified Old Harbour New Testament, which topped the group on a superior run rate. However,MOB need to beat The Seniors handsomely in order to advance to the semi-finals with a better net run rate.

At Lime Tree Oval, Bethel Born Again (eight points) are favoured to beat Portmore Gospel Assembly (six) at 9:30 a.m., while in the feature match at the venue at 1:30 p.m., PFM Development will have a tough assignment against Zone Two leaders Power and Light (P&L) Ministries, a team that has won three straight matches. P&L have already qualified for the semi-finals, while PFM must hope for a miracle to advance, even if they surprise P&L and win.

Christian Pen and Portsmouth are in quite a tussle for fourth spot - an automatic qualifyingspot for the semi-finals of the LIME St Catherine FA Major League. With three games to play, Christian Pen are locked on 23 points with Portmore rivals Portsmouth. Christian Pen and Portsmouth have identical plus-two goal difference, but Christian Pen have scored more goals. The two cannot breathe too easy as sixth-place team Wanderers (20 points) and seventh-place Dunbeholden, both on 20 points, are within striking distance of the semi-final hopefuls. Leaders, Frasziers Whip (40 points) and second-place Rodwood (34) have already qualified, while third-place DB Basovak (30) are virtually through to the semi-finals.

Five games were played last Saturday and Christian Pen squandered a glorious chance to set daylight between themselves and Portsmouth as they drew 1-1 with Rodwood. Fabian Whyte gave Christian Pen a 74th-minute lead, but Rodwood's André Austin equalised in the 76th minute. Rodwood also missed a penalty as Dale Dixon botched his kick in the 26th minute.

Colours Sports Bar, Port Henderson Plaza, will be the venue tomorrow afternoon for the second staging of a Pairs knockout domino competition. Registration starts at 11:30 a.m. and the tournament is scheduled to begin at noon. Entry fee is $1,000 per pair and players who are eliminated in the first round can pay and re-enter the competition.

The tournament is expected to attract the best players in Portmore and St Catherine. The last pair KO was kept at Ken's Wildflower and theFort International duo of Junior 'Super Cool' Williams and Neville Thomas copped the title.