All set for 2012 Carifta Games 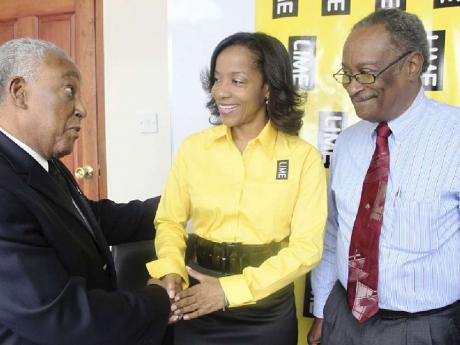 With just under two weeks to go before the April 7-9 LIME Carifta Games in Hamilton, Bermuda, the local organising committee is reporting that everything is in place for the region's largest sports festival.

In midweek, Donna Watson, president of the Bermuda Track and Field Association, told North American, Central America and Caribbean Athletic Association (NACAC) president Neville 'Teddy' McCook and LIME's regional vice-president, marketing and corporate communications, Grace Silvera, that "the games could happen tomorrow and we would be ready as grandstand tickets are sold out and general admission tickets are going fast. All the technical elements are in place, the accommodation, the transportation, the officials have been trained and the stadium is prepared."

"Our marketing campaign and media coverage, which started back in September of 2011, has really helped to create a buzz here in Bermuda and all the noise around the Olympics is really getting everybody excited for these games. The government is giving us their full backing; in fact, they have closed school on Monday (April 9), because we don't normally observe an Easter Monday holiday so school would usually be open," she continued.

In responding, Silvera reiterated her company's commitment to the region's youth.

"From all indications, this is going to be an exciting staging of the LIME Carifta Games, made even more palpable by the Olympic buzz.

"For us at LIME, this year's games are especially remarkable as the world's attention is glued to the Olympics in London and we are elated that almost all the participating Caribbean athletes were once stars of the Carifta Games. Our sponsorship of the LIME Carifta Games is not just an investment in the games but a commitment to preservation of the athletic legacy of the Caribbean," she stated.

Barbados, Jamaica, British Virgin Islands, Anguilla, and Trinidad and Tobago are among the teams which have already submitted final registration documents. Meanwhile, teams from The Bahamas, Cayman and Bermuda are staging annual trials this weekend. A submission from all 27 teams would mean the participation of over 550 young Caribbean athletes.

McCook said the numbers are encouraging even as the championships continue to provide an important developmental stage for the young people of the region.

"Huge participation such as this indicates that the youth athletic programme is strong and each year their continued levels of development are evident in the results that are achieved at the Carifta Games," he said.