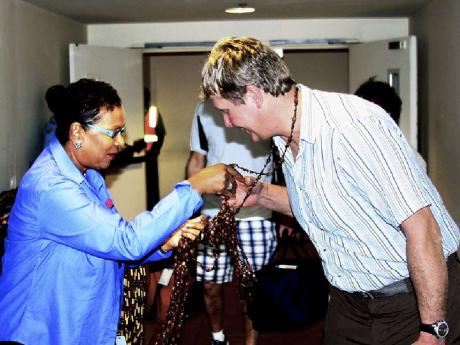 Deputy director of tourism with responsibility for marketing, Sandra Scott (left), gives a beaded necklace to Jason Brewer, the first passenger to disembark the Sunwing Airlines flight from Newfoundland in Canada on its inaugural flight to Montego Bay on Sunday, March 18. - Contributed

When the airline arrived at approximately 2:45 p.m. last Sunday, the aircraft was given the ceremonial water baptism - water sprayed on to the airplane by a water truck.

The Sunwing flight had 174 passengers on-board in addition to the crew.

A total of seven flights will be made between the two cities this season, which could bring an estimated 1,200 passengers to the island.

Each passenger was also given a beaded necklace from the JTB. Captain of the flight, Ondrej Kovar, who was also visiting Montego Bay for the first time, was presented with a book on Jamaica by Sandra Scott.