Book review - Jamaican history through the eyes of a journalist 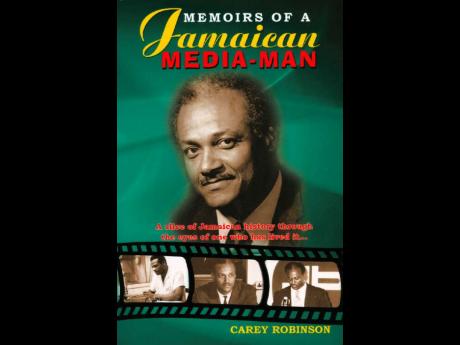 If craving lingers for a taste of Jamaica's pre-colonial existence and a nation's entry into the realm of self-governance to Independence and beyond, or thirst develops for a simply wonderful literary feast, Carey Robinson's Memoirs of a Media Man will suffice.

The account from Robinson's days at Calabar High School to the famed Howard University in the United States of America as a 'coloured boy', and his working life as a journalist or, better yet, a 'media practitioner' in Jamaica, is rivetingly informative.

As well, the eye-opening recounts transport the reader on an intricate journey through the media landscape - both print and electronic.

From the first chapter, it is obvious that the author was spawned in the belly of the monster of colonialism and his proverbial umbilical cord would not be severed until his foray into the United States.

There, Robinson was to be confronted by another kind of monster - the dragon of 'Jim Crow' - the era in which racial segregation was as natural as night follows day.

In simple but exquisitely crafted prose, replete with more than a hint of humorous injections, the skill of Robinson is unveiled as he cruises through the tumultuous days of the 1930s. In so doing, he highlights the fascinating penchant of Jamaicans for protest demonstrations, all too often, more irrationally than rationally.

Robinson would come in contact with Sir Alexander Bustamante and Norman Washington Manley - the two contrasting Jamaican cousins who featured prominently in the industrial tumult of the day and later political activities to propel Jamaica into Independence and beyond.

He would also interface with the charismatic Michael Manley, who he had briefly met as a schoolboy, as well as Hugh Shearer and the pragmatic Edward Seaga in the challenging, if exhilarating days of emerging self-governance.

What is crystal clear is that from the start, politicians were constantly in the midst of public unrests and have remained there until this day that the phenomenon has emerged into a favoured public pastime.

Robinson's account of his media journey seems to exhume 'human artefacts' - great men and women of the media who have 'passed through' The Gleaner Company - the oldest media house in the region.

He recounts in fascinating detail, that the birth of foreign-minded Radio Jamaica (RJR) and the now defunct Jamaica Broadcasting Company (JBC), nearly 10 years apart, was an eye-opener and the emergence of JIS television.

He related how Caucasians - rally media moguls from the United Kingdom and Canada - were ushered into the country to teach Jamaicans the workings of electronic media.

After developing his writing craft at Spotlight magazine, owned by the brash Evon Blake then a sojourn at the Gleaner, Robinson developed his announcing craft at RJR.

He would later move to the spanking new state-owned information agency called Government Public Relations Office, (which had just been formed), now called the Jamaica Information Service, which would later be subject to name changes with the change of each political administration.

In a sense, 'Memoirs of a Media Man' has put to rest some of the romanticised versions of the 'good old days' in the media as errors, blunders and faux paus flowed through the airwaves as the learning curve of them became precipitous.

The veteran media man's account of the effects and implications of the JBC strike on the psyche of a young nation, and its impact, 40 years later, on Jamaica's socio-political sphere, is most insightful.

In relating challenges as he honed his creative talents, reeling headlong into the tumultuous days of the 1970s, Robinson has succeeded in highlighting in classic detail and colour, the struggles of not only the media landscape but a burgeoning nation.

Certainly, the journey has been treacherous but was well worth the effort, given where we are today on Jamaica's competitive media landscape.